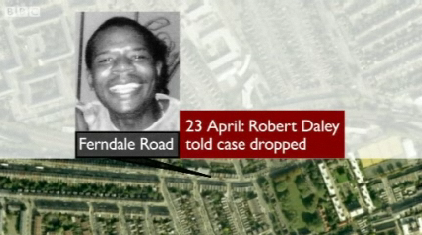 A suspected pedophile was murdered by a girl of 14 who claimed he had pestered her for sex since she was 11, a court heard yesterday.

Robert Daley, 45, was stabbed to death at his flat by the girl and her sister's boyfriend - hours after charges against him were dropped, an Old Bailey jury was told.

When arrested, the girl branded Daley a "dirty pedo". She told police the boy, also 14, had repeatedly stabbed him after he tried to grab her.

Daley was on bail after the girl's 16-year-old sister accused him of molesting her. On the morning on his death he was told there would be no charges.

That afternoon the alcoholic crack user phoned the elder girl - and she told him to stop pestering her.

The sister and boyfriend, now both 15, deny murdering Daley at his flat in Brixton, South London. The trial continues.