He was supposed to be her perfect match but he almost cost her her life. Mary Kay Beckman of Las Vegas is suing Match.com for $10 million. She said she met a man through the popular dating website and he tried to kill her.

"He broke into my garage," said Beckman. "When the police arrested him, he said he wasn't there to hurt me. He was there to kill me. His intent was to kill me that night."

Beckman has told her story many times but she still gets emotional recalling the worst experience of her life.

In 2011, Wade Ridley stabbed her 10 times with a butcher knife. When the knife broke, he stomped on her head. 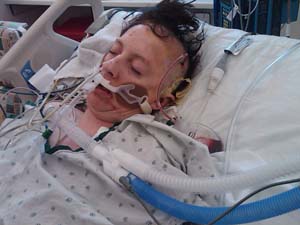 "It's a very traumatic thing for anybody to have to go through," said Beckman

The 50-year-old real estate agent and mother of two says the attack left her hospitalized for months. She endured three head surgeries and a seizure. While she was in the hospital, Beckman said Ridley killed an Arizona woman he met, 62-year-old Anne Simenson, on the same website.

"I struggled a lot thinking why did she die and why did I live," said Beckman She said Ridley came looking for her but authorities arrested him. Ridley then committed suicide in jail.

Now Beckman is suing Match.com, claiming it doesn't do enough to keep violent offenders off its site.

Beckman is pushing for a disclaimer on Match.com similar to what you find on cigarettes, warning people dating sites can be harmful.

"God saved me that night for a reason," said Beckman. "I shouldn't be here today. It's my mission and goal to save someone from being hurt or help someone make a different decision with their online dating choices."

Beckman said besides the physical scars she's healed from the attack. She's still in counseling but she's now in a happy and healthy relationship with a man she did not meet online.

"What happened to Mary Kay Beckman is horrible but this lawsuit is absurd. The many millions of people who have found love on Match.com and other online dating sites know how fulfilling it is. And while that doesn't make what happened in this case any less awful, this is about a sick, twisted individual with no prior criminal record, not an entire community of men and women looking to meet each other."

They add there's online safety tips throughout the site.

Beckman said she'd been on Match.com for two months when she met Wade Ridley in September 2010. She said it took her only eight days to see his true colors. She broke it off and he turned violent

Woman suing Match.com for setting her up with serial killer