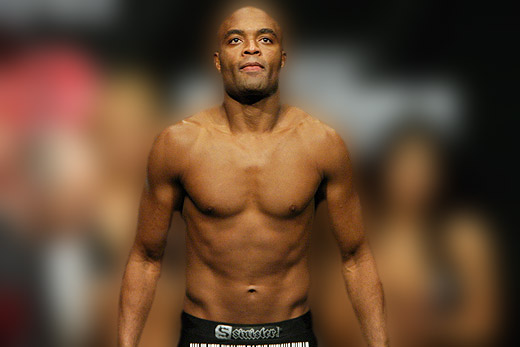 Considered by many the reigning pound-for-pound king in mixed martial arts, UFC middleweight champion Anderson Silva has been imagined in many fascinating scenarios. Some have envisioned him fighting welterweight champ Georges St. Pierre at a catch weight (Silva himself once suggested the possibility of fighting at welterweight). A permament move up one division to light-heavyweight has also been mentioned, and UFC President Dana White has voiced a belief that he's big enough and talented enough to fight some UFC heavyweights.

Well, put all those dream bookings on hold. The mercurial star now says that he's perfectly content ruling over the 185-pound weight class, and that he plans to stay there for the remainder of his career.

Eschewing possible superfights with the likes of St. Pierre and Mauricio "Shogun" Rua, Silva says they'll have to meet him on his own turf to face him.

"If you want to beat me up, make weight and come fight me in my category, my division," Silva said through his manager and interpreter Ed Soares.

Silva is in the midst of a historic run in the sport. At 26-4 overall, he is the holder of 11 straight victories in the octagon, a UFC record. He next defends the championship against No. 1 contender Chael Sonnen at UFC 117 on August 7.

Despite his astounding success, he's faced some backlash from critics who thought several of his recent performances have been uninspired. He was booed soundly at the end of his last fight, a UFC 112 unanimous decision over Demian Maia, in which many people believed he could have finished Maia early on. It's caused many to suggest that Silva is no longer interested in facing middleweights, but he denied that was the case.

Moments later, Silva emphasized that not only was he not bored, but that he planned to be at middleweight for a long time to come.

"He said that I didn't translate it exactly. He said he wants to retire fighting in his weight category," Soares said.