Tyson Fury Vs. Deontay Wilder 2 Goes Down This Saturday, February 22. Who's Your Pick To Win? 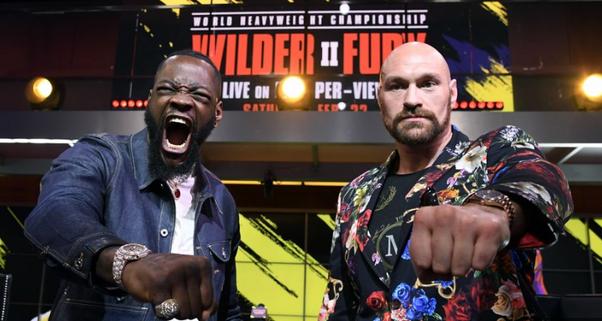 The biggest heavyweight title fight in recent memory goes down this Saturday, February 22, at the MGM Grand Garden Arena in Las Vegas.

Deontay Wilder vs. Tyson Fury 2 is a boxing fan's dream.

Their first fight in 2018 ended in a draw. Fury seemed to have the edge going into the 12th, but got caught with a beautiful right hand and left hook combination from Wilder that put him on the canvas for the second time in the fight.

Almost everyone in the arena and watching at home thought it was over for Fury at that point, but he rose from the dead like The Undertaker to finish the round.

Saturday's action kicks off with coverage beginning with a preshow at 7 p.m. ET followed by the undercard at 7:30 p.m. ET. The pay-per-view main card is set to begin at 9 p.m. ET. Expect Fury and Wilder to make their ring walks for the main event between 11 p.m. and midnight.

The pre-show and preliminary bouts are available on ESPN News and Fox Sports 1. At 8 p.m. ET, the undercard continue on ESPN and FS1.

The Wilder vs. Fury 2 main card is an ESPN+/Fox joint pay-per-view. It can be live streamed through the Fox Sports app and ESPN+. The pay-per-view price is $79.99.

Who is your pick to win?