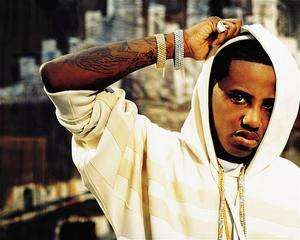 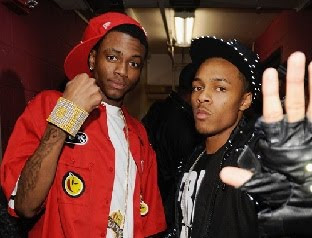 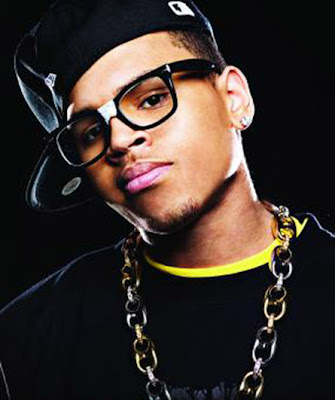 TWITTER REPORT! You know sound something like that Missy Elliot remix intro. We all know Twitter has got the hip hop community in a frenzy and there is a lot going down on Twitter. You wanna know all the birdness going down on twitter. Jazzy got you covered so you already know what time it is. I'm GOIN IN!

Fabolous aka @MyFabolouslife aka #FABSTEETH whatever just ask @NickiMinaj about Fabs chip tooth! wait back to the point, Fabolous aka THE BEST TO EVER TWEET which is the throne he owns on Twitter sent out a tweet stating a girl rolled up on him in her whip with some dude and said, AYO Fab! You fell off on TWITTER! YUUUP! "TWITTER" is that serious folks. Fabolous sent a warning. "The Best to ever Tweet will be back as of Monday 3.22.10" and was that yesterday ok we will see if @MyFabolouLife is back and GOIN IN. He also decided to go in on a few twitter fronters for jacking his TT(Trending Topics). I could tell the whole story but I got my own twitter birdness going on @itsJazzyFBaby so check out the full TWITTER REPORT BELOW! I just hope Fab don't start *#twittersnitchin* and getting people locked up again. Everyone was in a frenzy! I think that was the same day #FABSTEETH became a trending topic like Lil Mama number sign.

The trending topic is #ListenBitch and once again the trending topics has started some mess. Soulja Boy sent out the tweet add Chris Brown @ChrisBrown and Bow Wow @BowWow followers up and they still don't add up to mine *SHOTS*. Bow Wow replies lets add bank accounts up and then Soulja Boy hit him with a low blow. Soulja Boy tweets lets add up the first week sales of our new albums*#SHOTS*. Chris replies with a snappy come back about how much his show performance is worth and typical Bow Wow does as he did when Fabolous made him a trending topic like Lil Mama number sign he deleted his tweets #C'monSon!

Fabolous your Mixtape TINC2 might be blazing hot in the streets and Soulja Boy and Bow Wow the two of you do your thing on those albums but for right now here are your TWITTER REPORTS! Your favorite celeb is no different from you and I. 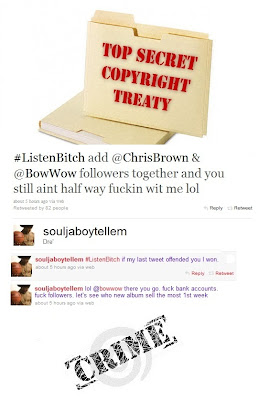 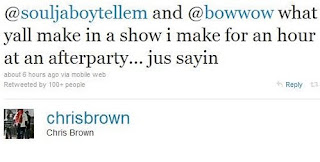