Tiger Woods and wife Elin Nordegren refused to talk to police about the car accident again on Sunday.


Tiger Woods broke a three-day silence Sunday to admit his "obviously embarrassing" car crash was all his fault - even as he continued to stonewall investigators.

"I'm human and I'm not perfect," the golf champ wrote in a cryptic statement on TigerWoods.com.

"The only person responsible for the accident is me," Woods wrote. "My wife, Elin, acted courageously when she saw I was hurt and in trouble. She was the first person to help me. Any other assertion is absolutely false."

Woods divulged no details of what caused the bizarre crash outside of his suburban Orlando home early Friday, or the status of his relationship with his wife, Elin Nordegren.

He also did not address allegations of a relationship with Manhattan club hostess Rachel Uchitel.

For the third time, Woods canceled a sit-down with state troopers who want a word with the the embattled athlete about the smash-up.

The Highway Patrol had expected to interview Woods and his wife at 3 p.m. but were told by Woods' lawyer, Mark Nejame, that the meeting would not happen.

"It has not been rescheduled," said Sgt. Kim Montes, spokeswoman for the Florida Highway Patrol. "He's not required by law to give us a statement."

"The crash investigation is ongoing and charges are pending," she said. It was not clear if anyone actually would be charged.

Nejame did provide cops with Woods' driver's license, registration and proof of insurance, as required

Police have said Nordegren used a golf club to smash a window of Woods' Cadillac Escalade to free her husband after he rammed a fire hydrant and then a tree shortly after pulling out of their driveway.

TMZ.com has reported that Woods was running away from his Swedish supermodel wife after a fight over allegations he had an affair with Uchitel. 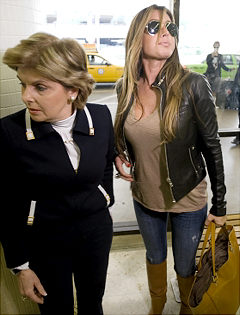 Woods said in his statement he had "a single-car accident earlier this week, and sustained some injuries."

"I have some cuts, bruising and right now I'm pretty sore," he said, adding that the incident has been "stressful."

A recording of the 911 call in the moments after the crash offered few clues about what transpired. A neighbor called to report the crash and ask for an ambulance - but didn't mention who the famous victim was.

"[He's] laying on the ground now," the neighbor said. When asked if the driver appeared to be conscious, the neighbor replied "no."

Meanwhile, the party girl who reportedly has Tiger Woods in the rough with his wife fled her Manhattan apartment early Sunday for Kennedy Airport.

Beauty Rachel Uchitel emerged from her Meatpacking District pad at 5:45 a.m. to walk her two dogs before hopping in a black car bound for the airport. She had a large duffel bag in tow.

"You know I would love to speak to you, but you know that I can't," Uchitel said when approached by a Daily News reporter. "I really wish that I could say something, I really wish I could."

In an interview published this week, Uchitel's bar mate, Ashley Samson, told the National Enquirer that Woods was stepping out on his wife with the nightclub hostess.

Uchitel had denied an affair with Woods and told The News she never met Samson. The Enquirer countered Uchitel's dismissal with photos of the two girls partying together in Spain. Uchitel arrived in Los Angeles in the afternoon and was met by her new attorney, celebrity lawyer Gloria Allred. The two ducked into a Town Car without speaking to the crowd of reporters at the airport.

Uchitel told Fox News on Sunday she "never crossed paths with Tiger in Melbourne" this month during the Australian Masters, contrary to the Enquirer's claim that the two had a tryst at the event.

Woods did not address the alleged affair in his statement, instead saying "the many false, unfounded and malicious rumors that are currently circulating about my family and me are irresponsible."

Woods, one of the world's most recognizable faces, is due in California on Tuesday for a tournament, but it was not clear that he would still attend.

TMZ.com reported Sunday that Woods talked about giving his wife a "Kobe Special" after the fight - referring to the $4 million purple diamond ring basketball star Kobe Bryant bought his wife, Vanessa, after he was acquitted of rape charges in 2003.

An unnamed source told TMZ he spoke to Woods over the phone on Friday, and that the golfer said he needed to visit Zales jewelry store to buy his wife "a house on a finger."