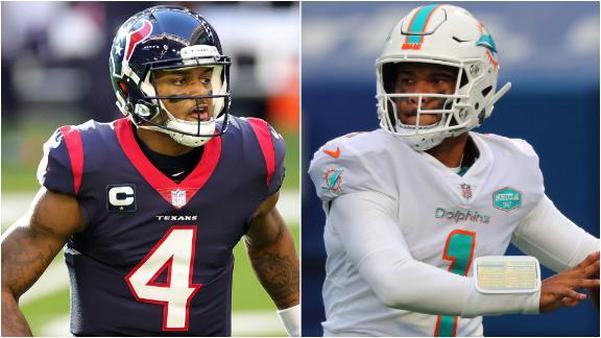 Reports that quarterback Deshaun Watson is unhappy with the Houston Texans and could ask for a trade reached a new level Sunday morning on ESPN's Postseason NFL Countdown, where insiders Chris Mortensen and Adam Schefter revealed the possibility of a trade with the Miami Dolphins. According to Mortensen, as Watson's frustrations boil, a scenario where the Texans make a deal with the Dolphins for quarterback Tua Tagovailoa could unfold.

"Reports that Deshaun Watson is unhappy with the Texans are accurate," Mortsenen said. "After the team hired Nick Caserio as GM, it did not interview Chiefs (offensive coordinator) Eric Bieniemy as a head coach candidate, sources have confirmed. Watson has a new $156 million (contract), but ... the franchise's insensitivity on social injustice causes have been reinforced, and a source close to the quarterback says he very well could push for a trade.

"And get this — one scenario for a landing spot is the Miami Dolphins, trading places with Tua Tagovailoa to the Houston Texans. And you're not going to get anything but denials at this stage from both franchises, Adam, but this is an offseason puzzle we may be trying to put together."

Schefter, who added in a published report Sunday morning that the Texans would have likely hired Pittsburgh Steelers vice president of football and business administration Omar Khan as their general manager if they followed search firm Korn Ferry's recommendation, confirmed Mortensen's sentiments.

"Tua for Watson? We'll have some things to talk about here in the coming weeks," Schefter said. "And the other option at Watson's disposal in the opinion of people around the league would be this — withholding his services from the Houston Texans. That's how angry he's said to be. And again, it's only January. It's just getting started. Perhaps they can calm him down and talk to him. But that is also an option that the Texans would not want to see, where Deshaun Watson would wind up withholding his services, threatening to retire or at least not go to Houston. But this is an issue that's not going away."

Schefter added that Watson is "said to be furious" at the direction of Houston. McNair hopes to speak with Watson when the quarterback returns from vacation, but Schefter reported that league sources believe the result could be Watson holding out from playing if a deal is not made.