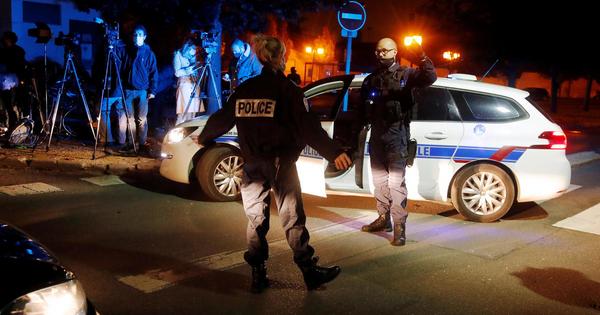 A history teacher who had allegedly shown caricatures of the Prophet Muhammed in class was decapitated and his assailant shot dead by French police as they tried to arrest him on Friday, police and prosecutors said. French anti-terror prosecutors said they were investigating the assault which happened on the outskirts of Paris at around 5:00 pm local time near a school in Conflans Saint-Honorine, a western suburb of the French capital.

Le Parisien and Reuters reported the teacher recently gave a class on freedom of expression and showed cartoons depicting the Prophet Muhammad, which are considered by Muslims to be blasphemous.

CBS News' Elaine Cobbe reports that a Twitter thread posted on October 9 contained allegations that a history teacher in Conflans Sainte-Honorine had shown students the cartoons depicting Muhammad. The thread contained a video of a man who said his daughter, a Muslim, was one of the pupils in the class, and that she was shocked by the teacher's actions. There is no indication the man in the video is connected to the teacher's death.

Prosecutors said they were treating the incident as "a murder linked to a terrorist organization" and related to a "criminal association with terrorists."

The allegations are similar to charges brought last month against a 25-year old Pakistani man who wounded two people in a meat cleaver attack to avenge the publication of caricatures of the Prophet Mohammed by the satirical weekly Charlie Hebdo.

The attacker seriously injured two employees of a TV production agency, whose offices are on the same block that used to house Charlie Hebdo. Both survived.

That attack came three weeks into an ongoing trial of suspected accomplices of the authors of the January 2015 attacks on Charlie Hebdo and a Jewish supermarket, which also saw a policewoman gunned down in the street.