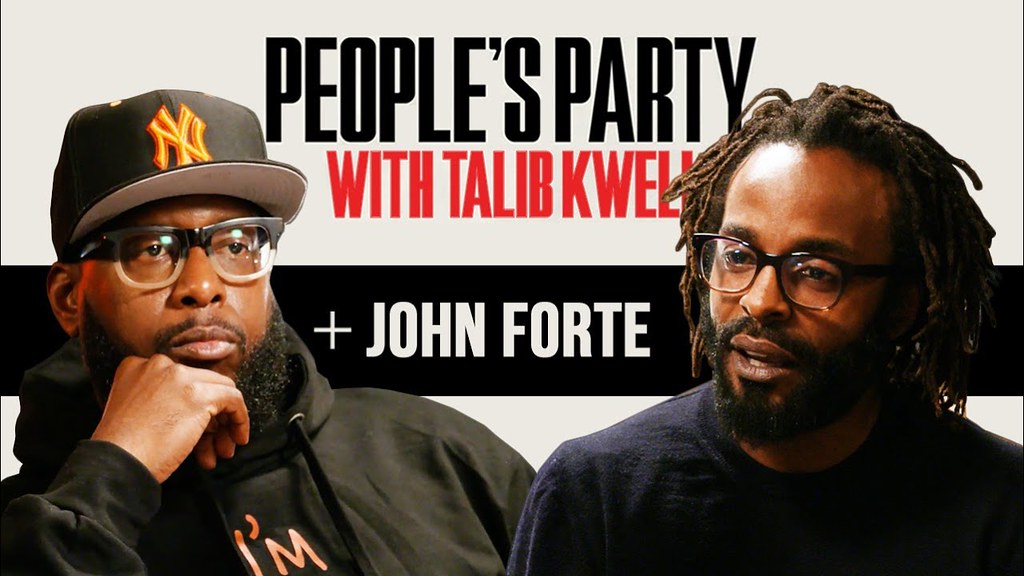 In this episode of People's Party, Talib Kweli and Jasmin Leigh sit down with rapper, singer, songwriter, producer and one of Talib's closest friends -- John Forte. John's life story is one of extreme highs, lows, and redemption. The show kicks off with talk of his early years growing up in Brownsville, Brooklyn with an adventurous spirit, always being on the move. They explore his unique sense of style, things that drew him to the 5% Nation, and landing his first job in the industry, not as an emcee, but as head of A&R for Rawkus Records.

Later they dig into John's work with the Fugees. Him being there from the jump and seeing first hand the progression of each member's career, especially that of his close friend Lauryn Hill. He also tells the story of his arrest at the Newark airport for possession of $1.4 million worth of liquid cocaine, and being sentenced to a mandatory 14 year prison sentence. He describes what led up to that moment, time spent while incarcerated, and the aftermath of eventually getting out early via an order of executive clemency from President Bush.

As the convo continues John speaks on the re-release of his album "I, John," which he wrote and recorded after his arrest, with a pending 14 year prison term fresh in his mind. He also speaks on his close friendship with legendary singer/song writer Carly Simon, who fought for John's early release, and her son Ben Taylor, also son of the great James Taylor. He talks about learning to play guitar while locked up, as well as the legendary DMX birthday round-table cypher session he participated in along with Big Pun, Canibus, and Mos Def. And in closing John reflects on how he feels about the latest chapter in his life as a husband and father of a 2 year-old baby girl.

2:18 -- "I'm eating mangoes in Trinidad with attorneys" reciting one of his classic bars, John recounts growing up in Brownsville, Brooklyn with big dreams of exploring the world at an early age, and utilizing New York's transportation system as far as it could take him.

8:00 -- Talib reminds John of admiring his creative sense of style when he first met him, and John explains the origins of his unique fashion choices stemming from not being able to afford designer brands.

10:45 -- John speaks on his introduction to the 5% Nation, and the specific elements of that community that he gravitated towards.

15:54 -- Talib explains his emcee superhero origin story, and how John ties into it, being his roommate at NYU and John becoming head of A&R during the earliest stages of Rawkus Records, which would become one of the most iconic independent hip hop labels in history.

21:23 -- John speaks on a moment that led to one of his biggest breaks, rapping for Jessica Rosenblum, who was a well known hip hop event promoter during that time.

28:33 -- John speaks on producing for 'The Score,' the evolution of the Fugees, his first live show, time spent with Lauryn Hill and how their relationship developed. He also touches disillusionment with the business of the industry and how the same issues impacted the Fugees.

39:56 -- John tells the story of his arrest for liquid cocaine at Newark airport and describes the factors in his life and music career that led to that moment. He also talks sentencing, life in prison, and his educational pursuits while incarcerated.

52:43 -- John touches on "I, John" -- the album he recorded at a time when he was aware of his pending prison sentence. He also speaks to his relationship with singer/song writer Carly Simon, who fought hard, advocating for his early release. Her efforts eventually proving to be successful, with an executive order of clemency from President Bush.

1:10:12 -- Talib asks John about his lifetime desire of learning how to play the guitar, finally getting the chance with time locked up, and speaks to how important it's become to his growth as an artist.

1:15:48 -- John reflects on the famous DMX birthday round-table cypher with Big Pun, Canibus, and Mos Def. They discuss John's verse and how significant that period was for him even many years later, as well as how they industry has changed since then.

1:19:41 -- John reminisces on a panic attack that he had smoking with Talib during a party hosted at the Palladium in New York during the early 90's.