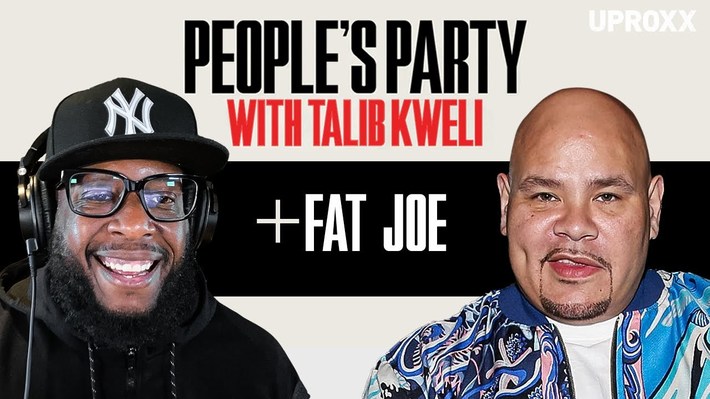 In this episode of "People's Party With Talib Kweli," Kweli and Jasmin Leigh sit down with Bronx born rapper and actor:

Here's what we got into with the man who Talib thinks may be our most hip-hop guest on the show yet.

• Meeting Biggie and Puff for the first time at the Lyricist Lounge.
• Being raised in the Bronx by parents of Puerto Rican and Cuban descent.
• Coming up deeply immersed in the fast life of the Bronx street hustle.
• How Diamond D and Chris Lighty saved Joe's life.
• Witnessing the birth of Big Daddy Kane, Jay-Z, Eminem, and Big L.
• Convincing Big Pun to include one of his most iconic bars on 'Twinz.'
• Needing the blessing from D.I.T.C. to get on LL's 'I Shot Ya Remix.'
• How Joe got over his fear of flying.
• The energy of DJ Khaled and his early fame made in Jamaica.
• Falling into depression after losing his sister, his grandfather, and Big Pun.
• How Joe and 50 Cent squashed their longstanding beef through their shared love of Chris Lighty.
• Why Joe felt compelled to give the South their due respect.
• The brother/sister-like relationship Joe shares with rapper Remy Ma.
• If Joe thinks the broken relationship of him and Pun's family will ever be mended.

3:22 -- Joe speaks on meeting Biggie and Puff Daddy for the first time at New York's Lyricist Lounge event in the early 90's. He also digs into his family background, being raised in the Bronx borough of NYC by parents of Puerto Rican and Cuban descent and living in the Forest Houses projects. Joe illustrates what it was like for him growing up in the mecca of hip hop and the things that compelled him to take part in the culture. Including his brother carrying crates for Grandmaster Flash, watching the early graffiti writers and b-boys and seeing members of the Furious Five play ball on the streets he grew up on.

15:29 -- Joe gives his take on the N-Word commonly used as a term of endearment by latinos like himself who grew up in predominantly black neighborhoods their whole life. He speaks on the frequent backlash from people on social media that don't approve, he points to the cultural disconnect of those that just don't understand how mixed communities like his, especially in New York have always been and he touches on the criticism of his reference to the "Wuhan virus" in a recent song with Benny the Butcher.

24:22 -- Joe speaks of coming up deeply immersed in the Bronx street life and being grateful for the Five Percenter presence there while he was hustling. He explains how his good friend producer/rapper Diamond D saved his life while they were coming up in the streets together, the significance of a particular light pole in his projects, getting the 'Sh*t Is Real Remix' from DJ Premier, Onyx teaching Joe he could say whatever he wanted on his records and answers if he still ever attempts to breakdance.

31:39 -- Joe goes on to tell his stories of being present for Biz Markie introducing Big Daddy Kane to New York, Big Daddy Kane bringing Jay-Z out for the first time at Studio 54, The Outsidaz introducing Eminem, Joe bringing out Big Pun as well as Lord Finesse putting on Big L and the audience's similar reactions as they knew they were all seeing something special at the time. They go on to discuss how Chris Lighty also had a huge hand in saving Joe's life and his question to Joe after getting shot right after his first single dropped.

36:05 -- Joe talks about being urged by Chris Lighty as well as others to keep his music street even though he had ambitions of making hits. He tells about convincing Big Pun to make some records that would do well on the radio similar to what Biggie did and Joe going on to make some real money with 'What's Luv?'. Joe also touches on things Big Pun taught him during the hundreds of hours of writing together and they discuss the different ways that hits can be made, the thug love phenomenon and Method Man doing big things.

42:35 -- Joe touches on happiness being the most valuable currency when it comes to hip hop culture, he speaks on the Diggin' In The Crates crew never having an argument during all their years together and needing to receive the blessing from them to get on LL Cool J's 'I Shot Ya Remix.' They also discuss the strength and courage of women as protectors and historically always put themselves on the front lines when it comes to activism and forcing social change.

46:33 -- Joe is asked about him having to convince Big Pun to add his iconic bar "Dead in the middle of Little Italy little did we know That we riddled some middlemen who didn't do diddly" to their song 'Twinz.' Joe also speaks on his long-time fear of flying, when he was able to finally board a plane to visit DJ Khaled in Miami, talks about finally making a trip to Asia where DITC fans were shocked to see him in their country and they discuss the undeniable energy of DJ Khaled and his early fame made in Jamaica.

55:16 -- Joe details falling into a deep level of depression following this loss of his sister, his grandfather and Big Pun all around the same time. He tells the story of the night he finally snapped out of it, goes on to talk about wanting to leave New York to live in Miami after Dipset started beefing with Nas, his disappointment when money and egos got in the way of unity within the culture, as well as Miami feeling like the good old days when everyone was supportive of one another.

1:05:11 -- Joe is asked about his long-time past beef with 50 Cent and how they came together as peers and friends through their shared friendship with Chris Lighty. He tells the story of showing up for the BET Awards' tribute to Chris' legacy and what 50 Cent said to Joe putting the beef to rest. They also discuss Joe's time in jail forcing him to do some self reflection and why Joe felt it was important to give the South their due props after years of being blamed for ruining the culture.

1:11:58 -- Joe talks about his experience dealing with a shady accountant and they discuss the long history of hip hop artists being taken advantage of by vultures in the industry. Joe also talks about rapper Remy Ma being like a little sister to him and the pact they made to always being there for each other. Joe is also asked if he thinks the hard feelings shared amongst him and Cuban Link as well as Big Pun's family will ever be mended. He also speaks on Jim Jones' Quarantine Studios.