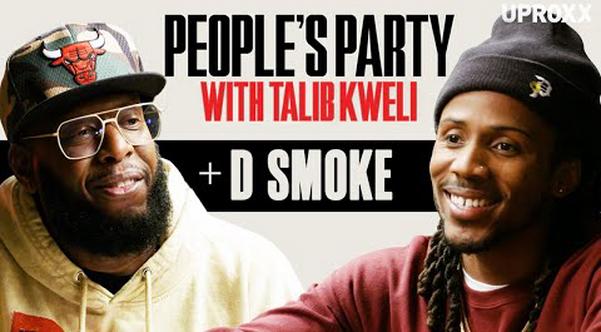 In this episode of People’s Party, Talib Kweli and Jasmin Leigh sit down with rapper, singer, songwriter, producer, and former high school teacher -- D Smoke. This extensive interview covers Smoke's youth, growing up Inglewood, California in a musical family with his mother Jackie singing for greats like Anita Baker, Tina Turner, and Michael Jackson, and her teaching him to play piano, starting at age 6. The trio discusses the early days of WoodWorks Records, Smoke and his brother having their own corner store selling CDs and merchandise to promote their movement, and ghostwriting for Genuine, The Pussycat Dolls, and others.

Later, D Smoke, Kweli, and Jasmin talk about different perspectives of what defines success, D's heartfelt song 'Free' (dedicated to his close friend Chiz who passed away due cancer), gang affiliations being inevitable growing up in the hood, D's use of the word 'Latinx', and the topic of N-word passes. D Smoke gives his take on his frequent comparisons to Kendrick Lamar and is asked how he has successfully balanced the hustler and pro-black sides of his identity simultaneously. Smoke is also asked about his work teaching at Inglewood High School, and what unique challenges teachers of color face working within marginalized communities.

In the second half of the conversation, things move to D Smoke's appearance on the Netflix hit show 'Rhythm + Flow'. Smoke talks about his unforgettable face-off with Snoop Dogg, and the friendship that was established in its aftermath. Both Talib and D agreeing on it being one of the realest moments on television. They discuss Cardi-B and her growth as a judge on the show, as well as his memorable battle with Old Man Saxon, how he got through forgetting words during a performance, and what was going through his head as they announced the winner of the competition. D also speaks on his latest album 'Black Habits', and the creative process behind it, physical bullying vs. cyber-bullying, cancel culture, working with rapper The Game, and what Kobe Bryant and his memory means to him and the city of Los Angeles.