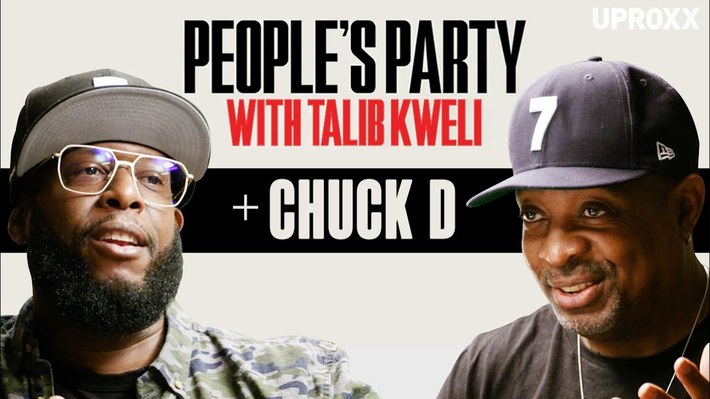 In this episode of People’s Party, Talib Kweli and Jasmin Leigh sit down with rapper, author, producer, and one of the most influential and respected figures around the world in all of culture. The leader of the iconic group Public Enemy -- "Mista" Chuck D.

Over the course of two hours, we get an insightful and exclusive discussion highlighting the life and career of a man who helped shape the course of music history. Public Enemy and their pull-no-punches approach to attacking politics and addressing social injustices was the beginning of a true movement in every sense of the word. With Chuck "trending like a chicken sandwich" after his fallout with Flavor Flav, he, Kweli, and Jasmine discuss the rapper's early childhood, coming up in the middle of the civil rights era, PE following Run DMC's footsteps to success in the industry, Chuck designing the PE logo, Yo! MTV Raps co-host Andre "Doctor Dre" Brown's huge contribution to hip-hop, and PE's signature sound. Chuck also speaks to the current generation, giving advice on use of their smartphones.

Later in the episode, Chuck reflects on the producing the demo 'Public Enemy No.1' by using two tape decks, which were called 'pause tapes' back in day, by those who didn't have access to a sampler. He touches on the struggles of getting radio play, even during the height of PE's popularity, the origins of his 'louder than a bomb' rapping style being inherited from his father, his mother forcing him to take part in plays that she put on at the local theater, and the process of coming up with the impactful titles of PE's records. Chuck also talks about mentoring a young Busta Rhymes and Leaders of The New School, all of them being from the Roosevelt neighborhood of Long Island, as well as what it was like being the first hip-hop group to perform in Ireland while the IRA was fully active.

As the conversation crosses the 1:30 mark, the discussion moves to Flavor Flav and his essential role in Public Enemy as the greatest hype-man in history. Kweli, Chuck, and Jasmine discuss the origins of the clock necklace, Chuck fighting to keep Flav, and the rest the members in the group when Def Jam wanted them dropped. They talk about Flav and his move to doing reality TV with "Flavor Of Love", despite the inevitable objections from long-time PE fans, including Talib himself. Chuck details the reasons why he didn't show up for his Grammy Lifetime Achievement Award, he discusses Pop Smoke's murder, and clears the air about Flavor Flavs supposed firing after Chuck performed at a Bernie Sanders campaign event. Chuck also reflects on his feelings when Obama was elected, shares his views of Donald Trump, and discusses the issue of lack of black ownership in black industries. Chuck finishes with a story about his experiences with Tupac Shakur, who he states was like a little brother to him, and talks about how he felt mentoring young emcees like Pac, Ice Cube, and Treach was like a calling. Chuck also tells about his friendship with Prince, and as the interview comes to a close, Talib states that we will definitely be seeing a part 2 of Chuck D at the People's Party -- as even that sprawling discussion had barely scratched the surface of a long and fascinating career of one of hip-hop's greatest of all-time.