Video And Audio After The Jump

Punches were thrown and chairs went flying after members of Grand Hustle scrapped with The Money Team on Sunday, May 25, in Las Vegas.

According to TMZ, An angry T.I. approached Floyd Mayweather Jr. at a Fatburger with an issue. Words were exchanged before Tip threw a punch at the boxing champion. Bodyguards intervened, sparking a chair throwing brawl between the two parties. 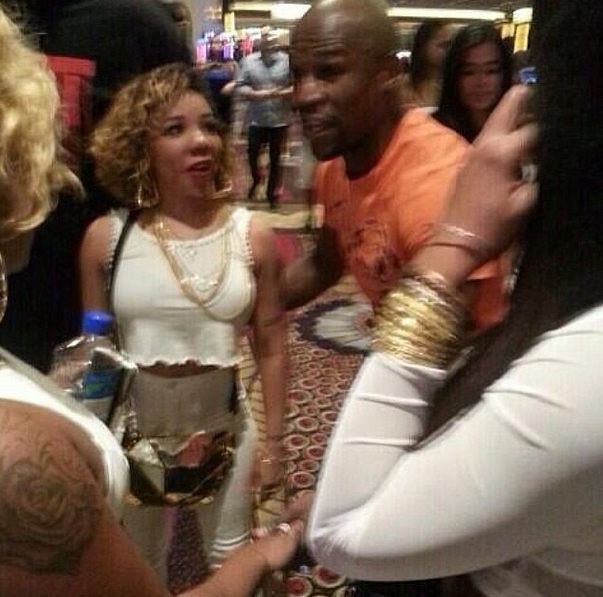 Floyd Mayweather Jr. standing next to Tiny while reportedly yelling at T.I.

Other reports suggest the fight was over Tip's wife Tameka "Tiny" Harris, who has reportedly been hanging out with Floyd. Prior to the fight the rapper approached Floyd at a casino.

The two then took their beef over to Fatburger.

"You control your bitch, motherfucker!" Floyd can be heard yelling on video captured at the scene.

Check out more video of the confrontation below.

Floyd being escorted away TMZ has obtained more footage of the chair throwing brawl as well as a photo of a Fatburger employee who was cut during the melee. The employee refused medical assistance and didn't want to talk to the police about what he witnessed. 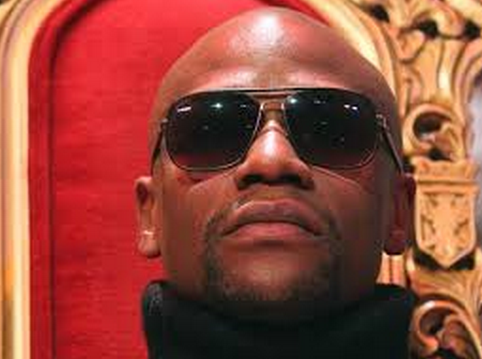 Floyd Mayweather Jr. has issued a statement via Necole Bitchie about the incident. He explains that the tension between him and Tip started from a photo Tiny posted on Instagram of her with The Money team after Money May's May 3 fight with Marcos Maidana. 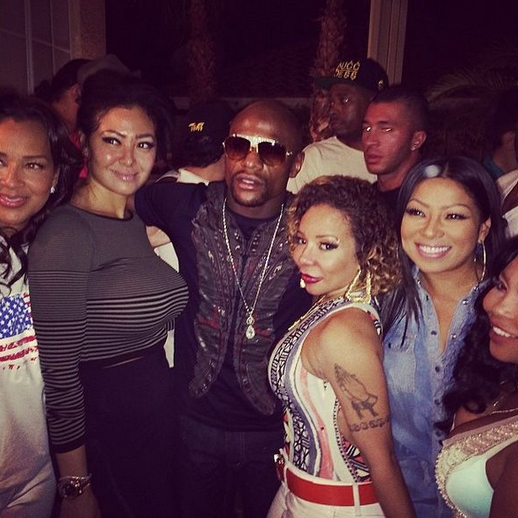 Floyd on his relationship with Tiny
I been knowing Tiny before T.I. I’ve never slept with her, I never kissed her, never touched her in no inappropriate way. Her friend Shekinah wanted to come to the [May 4th] fight, she brought Tiny with her. They came to the fight.

After the fight was over Saturday night, Sunday they came over my mother’s house. My mother had a big, big party for me. They came over and showed love. They came over to my house all cool, all respect. Hang out with The Money Team, my crew. Everybody was cordial. No disrespecting type. After that, I guess she put a picture up on Instagram of her at the fight so I guess he [T.I.] was feeling some type of way.

On T.I approaching him over the Instagram photo
[T.I] came to me when I was in New York. He stepped to me when I was at the jewelery store like, “Yo, let’s go outside and talk.” We went outside to talk, but he talked about, basically, “These girls tryna play us against each other.” I said, “I don’t know what you’re talking about. You’re talking about your wife?” I never put up a picture of her on Instagram, Twitter or Facebook. I was basically like, “Listen. I’m letting you know I ain’t got…me and your wife don’t have nothing…if you think so.

So Memorial Day weekend, a lot of people come out to Las Vegas. Tiny and Shekinah was out here. They come to my party last night. They cool. Everything is cool. We was at the strip club. Everything was cordial. We having fun. I throw my daughter [Iyanna] a big [14th] birthday bash today. I’m eating at Fatburger and next thing you know, he walk in talking about we need to talk again. And then I told him, “You need to get the f-ck outta my face. That’s what you better do.” And then he said, “I ain’t talking to all these people so you ain’t gotta talk loud.” I said, “Listen, don’t come to my face with no disrespectful sh-t. Like I told you before, you must’ve forgot what I did for a living.” He said, “You do in the ring, I do it in the streets.” I said, “My man, I do it everywhere. You can find out if you want to.” Just like that.

Then a couple of words exchange and people got to pushing and a riot kinda broke out. And then a bunch of chaos and that was basically it. Because, like I said before, he probably does some foolish things, but he ain’t no damn fool to swing on me. Like, you must’ve forgot what I do for a living. He had a totally different look on his face.

I’m not sleeping with that girl [Tiny] and I told that man before. But if I was, talk to her about that, don’t talk to me about that. But I’m not going to be disrespectful because I’m not going to sleep with a married woman. Now if she was divorced…I still wouldn’t do that because I’m cool with her and we have a real cool and cordial relationship and sometimes sex can mess a good friendship up. And basically, I don’t want to f-ck up a good relationship that I have with a person. So whatever I said, “stole your b-tch…take your b-tch” or whatever, I apologize to Tiny and all of her children and T.I.’s children for saying that. I want to apologize to the children and Tiny and Tiny’s family for saying what I said.

As far as him swinging on me, I ain’t having that. You see me. I’m out all night. He didn’t make an appearance so let’s see how his face look.