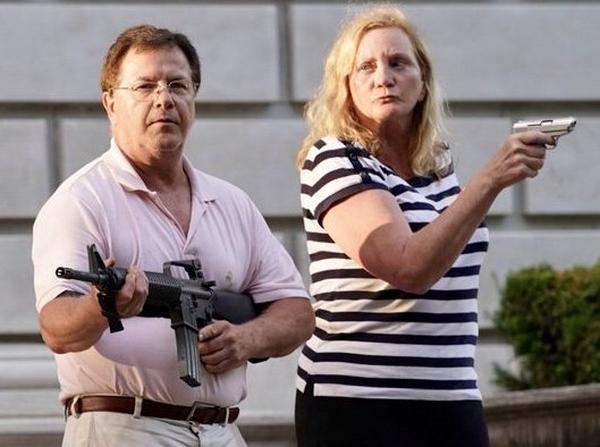 ST. LOUIS (AP) — A white couple pointed guns at protesters in St. Louis as a group marched toward the mayor’s home to demand her resignation after she read the names and addresses of several residents who supported defunding the police department during an online briefing.

A social media video showed the armed couple standing outside of their large home Sunday evening in the upscale Central West End neighborhood of the Missouri city.

In the video, the unidentified couple shouted at protesters, while people in the march moved the crowd forward, urging participants to ignore them. People in the crowd included Black and white protesters.

The group of at least 500 people was heading toward Mayor Lyda Krewson’s home, chanting, “Resign Lyda, take the cops with you,” news outlets reported.

Resignation demands come after a Facebook Live briefing on Friday where Krewson read the names and addresses of several residents who wrote letters to the mayor suggesting she defund the police department.

A couple has come out of their house and is pointing guns at protesters in their neighborhood #StLouis #lydakrewson pic.twitter.com/ZJ8a553PAU