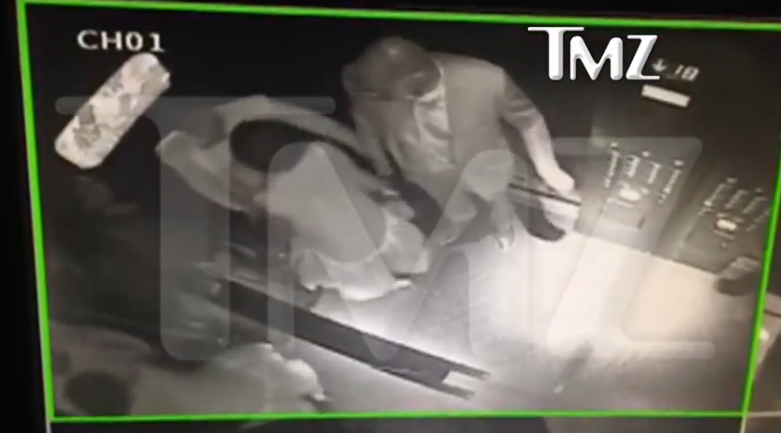 Video of a bizarre altercation between Solange Knowles and Jay Z has just emerged. According to TMZ, the incident occurred at a Met Gala after party last Monday, May 5, at the Standard Hotel in New York City.

Jay, Solange, a bodyguard and Beyonce can be seen entering an elevator. Solange immediately approaches Jay and appears to be yelling at him before starting to punch and swing wildly at him. The bodyguard grabs the singer and pulls her away as she continues to try to kick Jay. Jay pushes her away and never throws a punch of any kind. Throughout the altercation, Beyonce, who is Solange's sister stands next to her husband and doesn't try to intervene.

There is no way to tell what is being said because there is no audio on the surveillance footage. So far there has been no public comment regarding the fight from anyone involved.

It's interesting to note that Beyonce and Solange left the event in the same vehicle, while Jay was led to a different car. Solange and Beyonce leave the Met Gala after party together. Jay Z takes a different vehicle


TMZ has added the full fight video between Solange and Jay Z. One thing is clear, Solange is in an uncontrollable rage and her sister Beyonce doesn't seem to want any part of it.

While nobody knows for sure why the singer is so mad at her brother-in-law, US Weekly is reporting that it has to do with something Jay said.

According to their source:

"Solange flipped out over something Jay had said, that she took the wrong way. She took it too hard or too far. Not sure what it was, but she greatly overreacted."

Watch the full video below.