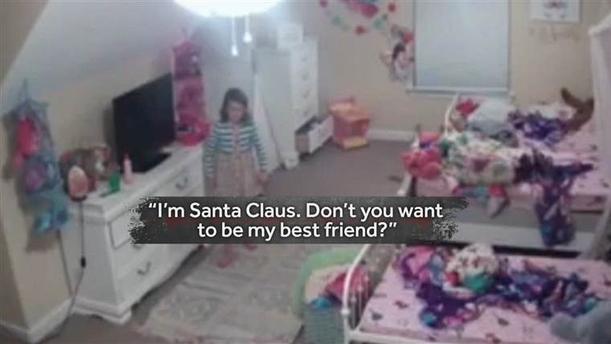 A Tennessee family said someone hacked a Ring security camera set up in their children's bedroom and taunted their 8-year-old daughter.

The LeMay family, of Memphis, said they installed the device to keep an eye on their daughters. A few days later, the family said a stranger had gained access to the device and was talking to the little girl.

In a video from the Ring device, the child, standing in her room, asks: "Who is that?"

A man responds that he's her "best friend."

"I'm Santa Claus. Don't you want to be my best friend?" he says.

The terrified girl screams for her mother.

The hacker also played music for the girl and instructed her to mess up her room and break her television.

"You can do whatever you want," he says.

"I don't know who you are," the girl responds.

Ashley LeMay, the girl's mother, said that the hacker could have watched her daughters changing or sleeping.

"They could have seen all kinds of things," she said.

Ring told NBC News in a statement that, "While we are still investigating this issue and are taking appropriate steps to protect our devices based on our investigation, we are able to confirm this incident is in no way related to a breach or compromise of Ring’s security."

The terrifying ordeal the LeMay family experienced isn't the first time there have been reports of security camera devices being hacked.

Earlier this month, a Florida family said someone hacked their Ring device and spewed racial slurs at their 15-year-old son. The family said told NBC affiliate WBBH in Fort Myers that they had to remove the batteries from the camera.

"I was scared... I was scared. I didn't know who that is, how long he'd been watching us and I'm still scared now because I don't have any answers," Josefine Brown told the outlet.

In January, an Illinois family said a stranger hacked into their Nest home security camera and thermostat.

Arjun Sud told NBC Chicago that after he put his 7-month-old son to bed he heard someone talking to the infant. The hacker also turned the heat up in the room to 90 degrees.

“The moment I realized what was happening, panic and confusion set in, and my blood truthfully ran cold,” Sud said. “We don’t know how long someone was in our Nest account watching us. We don’t know how many private conversations they overheard.”

During that incident, Google, which owns Nest, told the outlet that its systems were not breached and customers were "using compromised passwords" that were exposed in breaches on other websites.