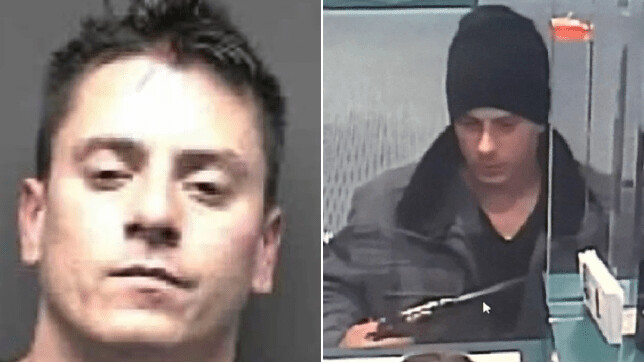 FALL RIVER, Mass. (WPRI) — A man from Chepachet, R.I., was sentenced last week to three years in state prison and another two years at the Bristol County House of Correction after he pleaded guilty to charges of armed robbery and assault and battery on a police officer in connection with a North Attleboro bank holdup.

Prosecutors said Christopher Castillo robbed the bank on Dec. 5, 2016, after getting a ride there from a woman he had just met through a dating app. She’d picked him up at his parents’ house in Rhode Island then drove him to North Attleboro as he drank wine in the passenger seat, according to the office of Bristol County District Attorney Thomas Quinn.

Castillo, 33, walked into the Bristol County Savings Bank, showed a teller a gun in his jacket and demanded $1,000 because he was “really hurting” and needed the money, prosecutors said.

After getting the cash, Castillo ran out and jumped back into the woman’s car. The woman later told police he ordered her to drive off as he carried the cash and gun as well as a hat and sunglasses.

She obeyed and started driving, according to prosecutors, but when she saw blue police lights, she pulled into a Dunkin’ Donuts parking lot and bolted out of the car. Police did not charge her with any crime.

Prosecutors said police found Castillo still in the car then pulled him out as a struggle ensued. Castillo allegedly spat on the officers and said, “the gun isn’t even loaded.”

When the gun turned out to be an antique owned by a family member, police withdrew the charge against Castillo of carrying an illegal firearm.