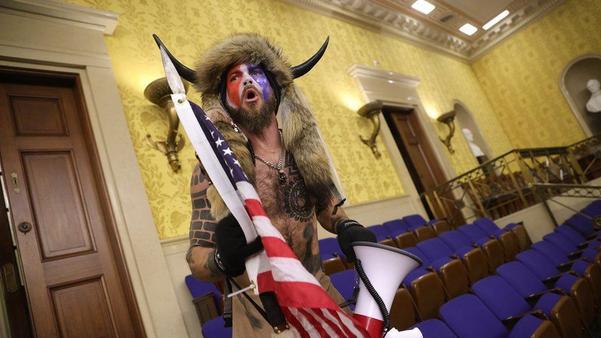 A prominent follower of the baseless conspiracy theory QAnon has been charged over the US Capitol riots.

Jacob Anthony Chansley, known as Jake Angeli, is in custody on charges including violent entry and disorderly conduct.

Mr Chansley, who calls himself the QAnon Shaman, is allegedly the man pictured with a painted face, fur hat and horns inside Congress on Wednesday.

Donald Trump faces another impeachment charge for his role in the unrest.

Democrats accuse the president of encouraging the riots, in which five people died.

The FBI has been appealing to the public to help bring the assailants to justice.

A statement from the federal attorney for Washington DC said: "It is alleged that Chansley was identified as the man seen in media coverage who entered the Capitol building dressed in horns, a bearskin headdress, red, white and blue face paint, shirtless, and tan pants.

"This individual carried a spear, approximately 6 feet in length, with an American flag tied just below the blade."

The statement said police had also detained a man from Florida believed to have been photographed carrying House Speaker Nancy Pelosi's lectern from the House of Representatives chamber.

Adam Johnson, 36, is being held on charges including one count of theft of government property and one count of violent entry.

Also among those charged is West Virginia lawmaker, Derrick Evans. He is alleged to have posted a video of himself online, standing outside the building with Trump supporters, and then going inside.

He was arrested on Friday and is also accused of violent entry and disorderly conduct on Capitol Grounds, the Department of Justice statement said.

More than a dozen people have now been charged in offences related to the assault on the Capitol building. They include an Alabama man allegedly found with 11 Molotov cocktails near the unrest. #jakeangeli #jakeangeliarrested #jacobchansley #qanonshaman #adamjohnson #derrickevans #nancypelosi #arrests #riots #uscapitol #donaldtrump #trump #presidenttrump #trumpsupporters #proudboys #twitter #fbi