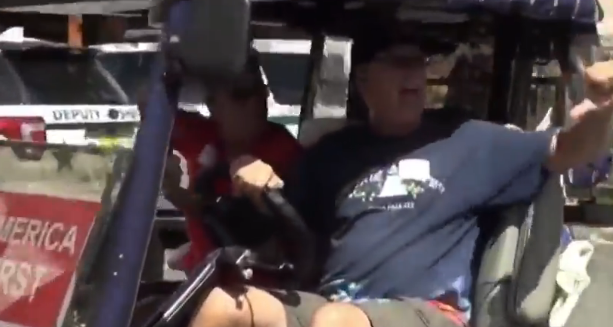 Well, Donald Trump loves his white supremacists, because he just gave his stamp of approval on a protest where one of his loudest supporters is screaming "white power."

It's a bizarre demonstration/counter-demonstration ... a line of golf carts traversed streets around Sumter County, Florida with Trump supporters, as Trump protesters lined the streets.

You hear demonstrators, mostly seniors, boil over in anger ... there's no physical contact, but it's intense.

True-to-form Trump retweeted the video, saying, "Thank you to the great people of The Villages. The Radical Left Do Nothing Democrats will Fall in the Fall. Corrupt Joe is shot. See you soon!!"

Again ... one of his most vocal supporters is the guy who screams "white power" ... one of Trump's "great people." So, he's not even masking it anymore.

Seniors from The Villages in Florida protesting against each other: pic.twitter.com/Q3GRJCTjEW

New- President @realDonaldTrump just retweeted a video apparently taken in The Villages in which a man can be heard yelling 'white power.' #Florida https://t.co/GOwnBRXKY8