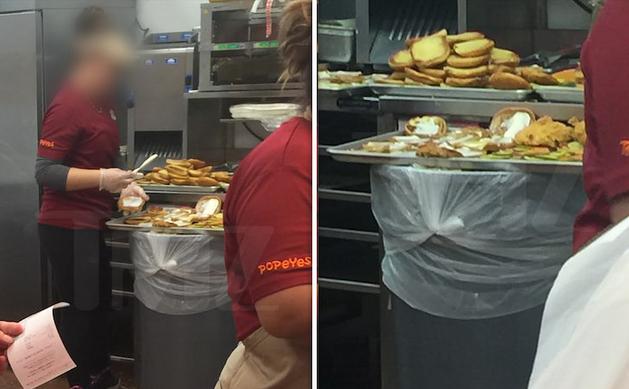 (TMZ) -- A Popeyes employee was caught making their now-infamous chicken sandwiches above a trash can -- for which the owner has now taken full responsibility and corrected.

TMZ has obtained some pretty shocking photos taken Friday at a Popeyes restaurant in Fairfax, VA -- where it appears an employee behind the counter is fast at work putting together as many sandos as possible. But, it's being done on top of a tray that's conveniently resting on top of a large trash bin ... and the setup was in customers' line of sight.

The placement begs many different questions -- the obvious one being ... WHY? Not enough counter space? Not enough hands on deck? Too much demand? Turns out, it was pretty much all of the above, according to this location's owner.

The guy tells us that on this particular day, the restaurant was overwhelmed after only having been open a few days, and then getting slammed with a 100 chicken sandwich order.

He says when he saw his brand new employees using the bin -- which he claims was totally empty -- he immediately ordered another table, which is in the store now.

Of course, this is just the latest eyebrow-raising behavior that's surfaced over the past week or so since Popeyes reintroduced their viral sensation sandwich.

We already know people have been losing their minds at several different locations nationwide over these things, with customers and employees coming to blows ... and in the worst incident, someone was fatally stabbed.