Paul Rusesabagina, The Man Who Inspired The Film 'Hotel Rwanda' Is Charged With Terrorism 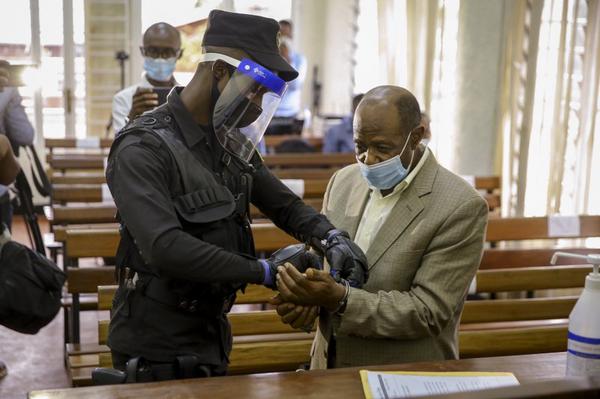 Rusesabagina declined to respond to all 13 charges, saying some did not qualify as criminal offenses and saying that he denied the accusations when he was questioned by Rwandan investigators.

Rusesabagina, 66, asked to be released on bail, citing poor health that has caused him to be taken to hospital three times in the time that he has been held in Rwanda.

“I request that I am given bail and I assure the court that I will not flee from justice,” Rusesabagina said. The court said it will rule on his bail application on Thursday.

Rusesabagina, credited with saving more than 1,000 lives during Rwanda’s 1994 genocide, appeared in handcuffs in Kagarama Court in the capital for a pre-trial hearing, in which the prosecution requested court permission to continue detaining him until investigations are completed.

Rusesabagina was represented by Rwandan lawyers David Rugaza and Ameline Nyembo, who have been discounted as state-imposed representation by his family outside Rwanda.

Neither his lawyers nor the prosecution explained the circumstances under which Rusesabagina arrived in Kigali at the end of August from Dubai. He had traveled from the U.S. to Dubai and then mysteriously appeared in Rwanda. The Rwandan court said the suspect was arrested at Kigali International Airport, contradicting the earlier police version that he was arrested through “international cooperation.”

When Rwandan President Paul Kagame spoke on national broadcasting about the case, he indicated that Rusesabagina may have been tricked i nto boarding a private plane in Dubai that took him to Rwanda.

Amnesty International on Monday urged Rwandan authorities to guarantee Rusesabagina his right to a fair trial.

“The lack of transparency around the arrest of Paul Rusesabagina and reports that he has been denied access to the lawyer hired by his family are red flags that cannot be ignored as the authorities prepare for his trial,” said Deprose Muchena, Amnesty International’s Director for East and Southern Africa.