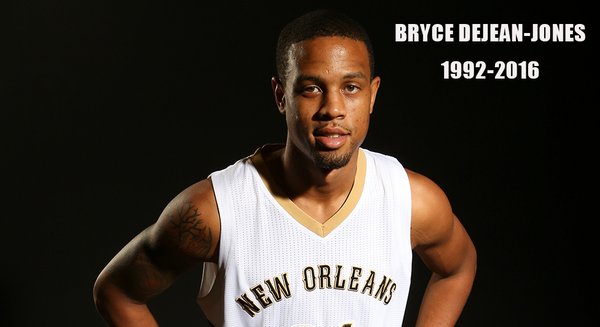 Officers were called early Saturday and found the 23-year-old player collapsed in an outdoor passageway, Senior Cpl. DeMarquis Black said in a statement. Dejean-Jones was taken to a hospital where he died.

A person living at the apartment was sleeping when he heard his front door kicked open, Black said. The man retrieved a handgun and fired when Dejean-Jones began kicking the bedroom door.

Dejean-Jones was from Los Angeles and it wasn't immediately clear why he was in Dallas.

"We are devastated at the loss of this young man's life (and) who had such a promising future ahead of him," the Pelicans said in a statement.

Statement from the Pelicans: pic.twitter.com/cb2k6mORzy

In his only NBA season, which ended in February because of a broken right wrist, the 6-foot-6 guard started 11 of 14 games and averaged 5.6 points and 3.4 rebounds. He was part of the 2014-15 Iowa State team that went 25-9, captured a Big 12 title and made a fourth consecutive trip to the NCAA Tournament. He was fourth on the team in scoring, averaging 10.5 points in 33 games. He shot a career-best 47.6 percent in his lone season as a Cyclone. He also played at Southern California and UNLV.

"This is a very, very sad and tragic day for everyone that's a part of the Cyclone basketball family," Iowa State coach Steve Prohm said.

Former Cyclones coach Fred Hoiberg added in a statement that Dejean-Jones was a "passionate and talented player that lived out his dream of playing in the NBA through hard work and perseverance."