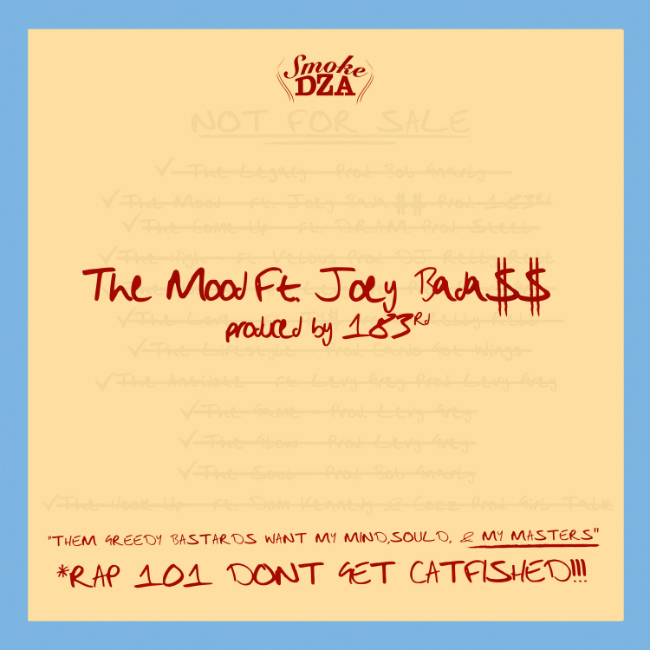 Smoke DZA Announces New Solo-Album, "Not For Sale", Which Will Be Released On 4-20-18

Hailing from Harlem, Smoke DZA is often regarded as one of the most respected artists of hip-hop’s new generation. Seamlessly straddling the boundaries of new school and traditional hip-hop, Smoke DZA has already garnered the attention and respect of artists like Wiz Khalifa, Snoop Dogg, A$AP Rocky, Kendrick Lamar, Rick Ross, Joey Bada$$, Mac Miller, Curren$y, Dave East and Big K.R.I.T., all of whom he’s collaborated with over the course of his illustrious career.

Despite the notoriety that Smoke DZA has received, he has never sacrificed his artistic integrity and that sentiment cannot be more evident than on DZA’s highly-anticipated new album Not For Sale; which serves as the official follow-up to his critically acclaimed Pete Rock-produced album Don’t Smoke Rock.

Not For Sale is undoubtedly DZA’s most conceptual album to date and it features a diverse assortment of guest appearances from rap’s elite; including Joey Bada$$, Ty Dolla $ign, D.R.AM., Dom Kennedy and Cozz (Dreamville) among others.

Today, Smoke DZA premiered the first single, “The Mood,” featuring Joey Bada$$ from Not For Sale via an exclusive premiere with Complex. “It’s a really cool fucking era we in” Smoke laments on “The Mood” and as they trade bars, Smoke & Joey do more than create a mood; they give you a vibe! "This is the mood of the youth. This is the mood of NYC we cherish and love" said Smoke.

Not For Sale will be released on Smoke’s favorite day of the year (4/20) on Babygrande Records, just in time for you to partake in his most intoxicating body of work to date; one that is sure to thrill any hip-hop listener.

Tracklising and Credits For Smoke DZA’s Not For Sale: