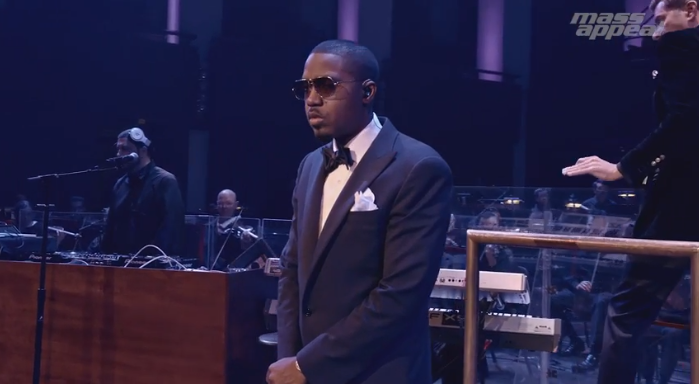 Two decades after the album’s critically-acclaimed release, hip-hop artist Nas teamed up with the National Symphony Orchestra at the Kennedy Center in Washington, DC, to stage a symphonic rendition of “Illmatic,” one of the most revered albums in hip-hop history. The new concert film Great Performances — Nas Live From the Kennedy Center: Classical Hip-Hop captures the energy and nostalgia of this collaborative performance and premieres nationwide Friday, February 2 at 9 p.m. on PBS (check local listings).

The program will be available to stream the following day at pbs.org/gperf and PBS apps. Released in 1994, “Illmatic” is the seminal debut album from Nas, and has long been considered one of the greatest hip-hop records of all time. The album is a densely textured, deeply lyrical portrait of life in the largest public housing project in North America, the Queensbridge Houses, located in the Long Island City area of New York City, home to nearly 7,000 people. “It’s crazy, you know, I wrote this in the projects in New York City. Here we are in the capitol of America, Washington, DC, and, you know, a bunch of white people with strings and all that, playing this album, and they [sic] feeling it,” says Nas in exclusive behind-the-scenes footage captured during on-stage rehearsal before the concert.

Alternating between candid reflections from Nas, photos from his youth, backstage footage and a symphonic performance of “Illmatic,” the program gives an inside look at the inspiration behind Nas’ music and his early life growing up in New York City. The combination of Nas and the orchestra reinvents the sound of some of his most popular songs, like “N.Y. State of Mind,” “The World is Yours,” “Memory Lane (Sittin’ In Da Park)” and “It Ain’t Hard to Tell” to create a classical hip-hop journey. “This was the first time me [sic], as a classical orchestra conductor, was going to branch out into the realm of doing hip-hop music and rap music. And the idea of finally tackling this genre was something I was really looking forward to do,” says National Symphony Orchestra Principal Pops Conductor Steven Reineke about this innovative collaboration.

Great Performances is produced by THIRTEEN PRODUCTIONS LLC for WNET, one of America’s most prolific and respected public media providers. Throughout its more than 40- year history on public television, Great Performances has provided viewers across the country with an unparalleled showcase of the best in all genres of the performing arts, serving as America’s most prestigious and enduring broadcaster of cultural programming.