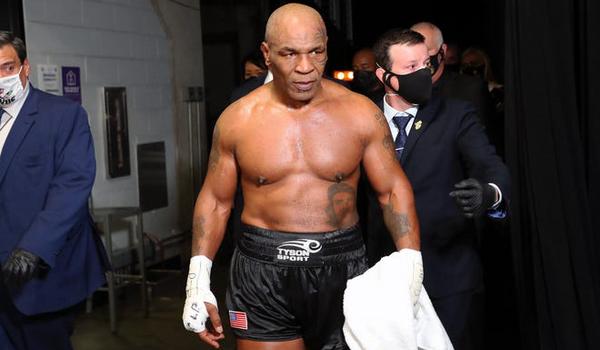 LOS ANGELES — Mike Tyson said he smoked marijuana right before he fought Roy Jones Jr. Saturday night in his celebrated return to the boxing ring at the age of 54.

"Absolutely, yes," he said during his post-fight press conference.

Tyson and Jones fought to a draw in an eight-round exhibition match at Staples Center as scored by three former WBC champions.

After the bout, Tyson indicated he smoked another joint, apparently before he met with the media to discuss his first fight in 15 years.

"Listen, I can’t stop smoking," he said. "I smoked during fights. I just have to smoke, I’m sorry. I’m a smoker. … I smoke everyday. I never stopped smoking."

Fighting in an exhibition rather than a professional fight apparently gave Tyson some wiggle room. The Voluntary Anti-Doping Association tested the fighters for performance-enhancing drugs prior to the bout, but marijuana reportedly was not on the list of banned substances.

Tyson said he stopped using cocaine about 2 1/2 years ago, but that turns out not to be the case for marijuana — even inside the ring.

"It’s just who I am,’’ he said. “It has no effect on me from a negative standpoint. It’s just what I do and how I am and how I’m going to die. There’s no explanation. There’s no beginning, there’s no end."

Did the marijuana help numb the pain Saturday night?

The bout proved entertaining, with Tyson looking fit and powerful and landing hard punches to Jones’ body. For his part, Jones flashed some of his old showmanship but also kept Tyson tied up for much of the fight as a means of survival.