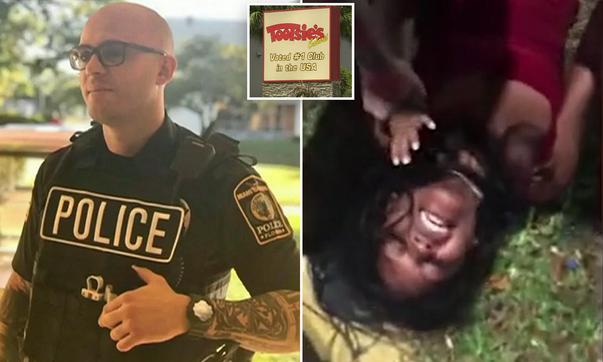 MIAMI GARDENS, FLA. (WSVN) - A former Miami Gardens police officer accused of using excessive for in the arrest of a pregnant woman is off the force after bonding out of jail.

Jody Martel was captured on camera using a Taser on a pregnant woman and putting his knee on her neck outside of Tootsie’s Cabaret in January.

Martel was arrested Thursday and charged with battery and official misconduct.

Thirty-two-year-old Safiya Satchell was arrested after a confrontation with Tootsie’s staff.

Martel, who worked the security detail that night, went too far according to Miami-Dade State Attorney Katherine Fernandez-Rundle.

Fernandez-Rundle said, “Martel allegedly used excessive force by putting his knee on Ms. Satchell’s neck. He went into Sacthell’s car without any evidence that she had committed a crime.”

Martel was caught on video reaching into Satchell’s car as she said back to him, “Don’t reach into my car.”

He then appeared to pull her out and use a Taser on her.

Satchell’s attorney released a statement saying in part, “The days of shuffling aside these videos of police misconduct are soon behind us as a community and a nation. We are pleased to see swift action taken by the authorities against this former officer.”

Martel has been in trouble before, appearing in a cell phone video struggling with a man in March at a Miami Gardens RaceTrac gas station.

The Miami Gardens Chief of Police called the rough arrest egregious behavior and wouldn’t be tolerated.

All charges against Satchell have been dropped.