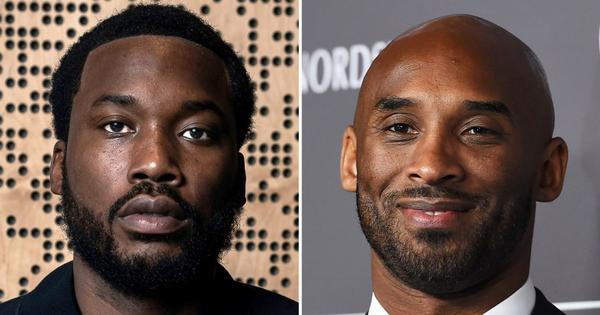 After fans leaked Meek Mill’s Kobe Bryant helicopter lyric, the rapper had to face his critics for the way he referenced the late NBA star in an unreleased song titled “Don’t Worry,” featuring fellow rapper Lil Baby. Despite backlash from fans, Meek took to Twitter to slam his detractors for their “internet antics.”

Social media users began calling for the “Going Bad” rapper, 33, to be canceled over his new track when a snippet of it leaked late on Wednesday, February 17. Fans quickly caught onto lyrics referencing Kobe’s helicopter accident in January 2020, which proved fatal for the NBA player, 41, his daughter Gianna, 13, & seven others. Meek’s lyrics read: “This bitch I’m f**kin’ always tell me that she love me, but she ain’t ever showed me / Yeah, and if I ever lack, I’m goin’ out with my chopper, it be another Kobe.”

Many listeners took issue with the reference, questioning why Meek had to name-drop Kobe to make a point just over a year after his death. Yet Meek, for his part, wasn’t interested in listening to their concerns. “Somebody promo a narrative & y’all follow it…. y’all internet antics cannot stop me ….shit like zombie land or something! Lol,” he tweeted early Thursday morning. “They paying to influence y’all now … its almost like mind control ‘wake up.’”

somebody promo a narrative and y’all follow it.... y’all internet antics cannot stop me ....shit like zombie land or something! Lol

They paying to influence y’all now ... its almost like mind control “wake up”

Many fans remained critical of the rapper, urging him to reconsider in the replies to his tweet.”Bro you feeling the pressure to use a real black community icon just to sell a new song,” wrote one Twitter user, noting that the verse was “disrespectful” to his grieving family. Another weighed in, “[Kobe] died with his daughter, her friends, & other people. His wife & surviving children won’t feel good hearing that at all. It’s been only a year. They aren’t rappers. They aren’t musicians. They aren’t gangster. Have some tact.”