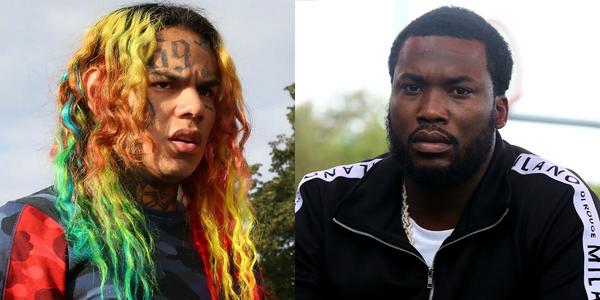 The 2 men were at a club in Atlanta & as Meek was getting in his car to leave, Tekashi appeared & they both started jawboning. In the video, you hear both rappers & their security yelling at each other. It looks like Tekashi is trying to lunge at Meek.

Tekashi is hurling insults at Meek, accusing him of working with cops ... yes, the irony is not lost on us.

They went from face-to-face to social media where it continued, 6ix9ne posting, “STOP LETTING THESE RAPPERS LIE TO YOU! THEY TO TOUGH FOR SECURITY @meekmill RUNNING AROUND WITH POLICE.”

Meek's response ... "69 waited out side the club for me they tryna get usssssss wtf ... We did not run into eachother I was getting in my car he just popped out ....we almost was smoking on that 69 pack for the love of a viral moment ..... he tryna get something locked up no cap lol"

And then, Meek lowered the boom ... “The feds sent him to take me out wtf. [I] had to spit on him so he retreated lol he really waited outside the club for me. I thought I was dreaming wtf we almost smoked him lol he posed a lil threat popping up in the parking lot waiting for me.”

Meek & Tekashi have squared off ever since Tekashi cooperated with the FBI in getting members of the Nine Trey Bloods locked up.

In May Meek tweeted ... "I hope that rat going live to apologize to the people he told on or the victim..... Y’all forgot that fast a “rat” killed nipsey he wasn’t suppose to be on the streets! That’s the only thing ima day because he’s dead... left his baby mom & child like a coward as targets!"

Rap in 2021: surrounded by security, Meek Mill and 6ix9ine got into a shouting match in which both guys recorded themselves on their phone. pic.twitter.com/w5gW8o4gO0

We did not run into eachother I was getting in my car he just popped out ....we almost was smoking on that 69 pack for the love of a viral moment ..... he tryna get something locked up no cap lol

Why did he pick meeeee wtf lol

Then he said a Pooh shiesty bar to me wtf

The headline should be: he waited outside a restaurant and popped up with the cops recording with his phone out! He tried to line me up to go to jail! https://t.co/gWAK3AEnbG