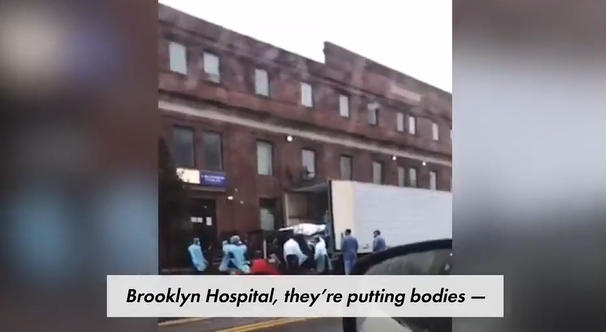 The coronavirus pandemic has slammed New York City so hard that health care workers are using forklifts to load dead bodies into refrigerated trucks, according to a viral video.

The 5-minute and 32-second clip posted to YouTube shows medical officials helping to load the corpses in body bags into the mobile morgue outside Brooklyn Hospital Center in Fort Greene, according to a man shooting the clip who does not identify himself.

“This is for real. This is Brooklyn,” a man filming the terrifying event can be heard saying in the video.

“They putting the bodies in the 18-wheeler … this is no joke … this is Brooklyn Hospital,” the man says as he begs for people to “stay inside” as the deadly virus continues to pummel the city.

The trembling man continues, “This may make you want to take this serious.”

New York City’s hospitals have been completely overwhelmed amid the outbreak of COVID-19.

Bodies being loaded into a Freezer truck in NY! #StayAtHomeAndStaySafe pic.twitter.com/PhiNGRP6ew