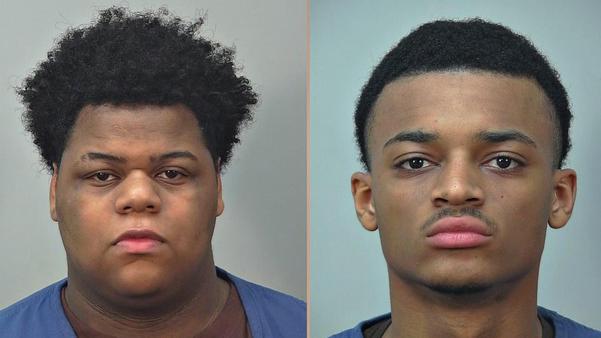 A judge in Madison, Wisconsin, has set $1 million bail for two teenagers charged with the execution-style murders of a respected doctor and an education coach.

Carre, 57, was pronounced dead at the scene as Potter, 52, was taken to a nearby hospital where she later died. Both were shot in the head and were left for dead in their house clothes with no shoes, according to the criminal complaint.

Investigators conducted several interviews that led them to arrest and charge Khari Sanford, the boyfriend of the couple's adopted daughter, and Sanford's friend Ali'Jah Larrue with two counts of first-degree murder. Sanford and Larrue made their court appearance on Tuesday via video conference, where a plea was not entered for the felony charges.

The day before the couple was murdered, Potter confided in a friend that they had moved her adopted daughter, Miriam Potter Carre, and Sanford into an Airbnb because they weren't abiding by the rules of COVID-19 social distancing, according to the criminal complaint.

Potter, a doctor at University of Wisconsin Hospital and Clinics, had a greater risk of infection because of medications she was taking, and she was concerned about the teenagers going in and out of the house, the complaint said.

"You don’t care about me," Potter Carre allegedly told her mother as they were being moved out.

"Probably the most incriminating piece of evidence, which was statements Sanford made to a citizen witness identified in the criminal complaint, that he in fact did shoot the folks involved, and was concerned after hearing on the news that one of them was alive," attorney William Brown said.

Sanford and Larrue are each facing two first-degree intentional homicide-party to a crime charges.