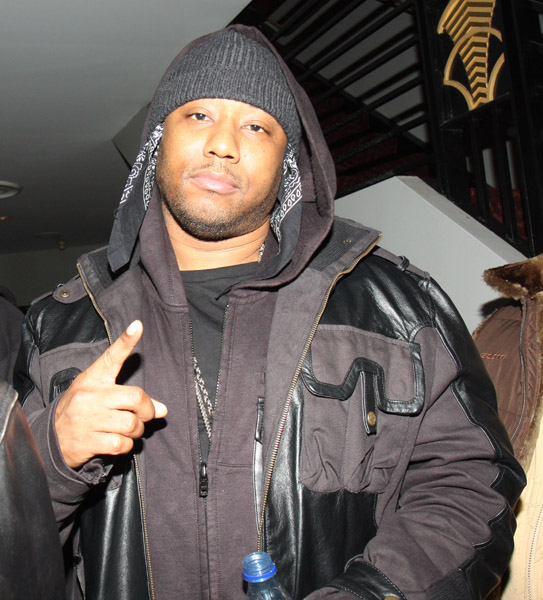 If you're a fan of Maino's and you see that brother in the street or in the club and show him love, believe it or not, it means more to him than you know. Maino is one of the MCs you could call a man of the people, and his followers give him strength. While his career seems to be on a serious upswing (street credibility, platinum single, acclaim from critics), personally, he's felt serious pain over the past year.

In the spring, his best friend 80 was shot by police, and just last week, he had to bury his cousin.

"I'm really going through it," Maino said last week. "Even right now, my closest cousin committed suicide. He's been on the road with me. You probably seen me with him. His funeral is tomorrow. This is what I'm saying. You get in the game, you think you escape all this. This is not a distant relative of mine. This is my closest cousin. We grew up together. My mother and his mother are sisters. Just thinking about that and going through that while I'm trying to attain fame and this lifestyle, it's two worlds. One side, everything is all good. On my personal, it's really not. My cousin was just here; now he's not. The circumstances behind him doing whatever he felt he needed to do, I can't really understand. [Entertainers] take the bumps and bruises and keep moving. We grieve, we pick up, and we try to keep it moving."


Maino has a slew of shows coming up, and he's promoting two projects. There's an EP called Unstoppable dropping Tuesday, and his second full-length LP is coming this summer.

"It's almost like no time to grieve," he said about the life of an entertainer. "What are you gonna do? What am I gonna tell MTV: 'I can't do an interview. I'm going through something in my personal life. Everybody in my family is crying right now'? You still gotta work, you still gotta achieve, you still gotta win. Under no circumstances do we stop for one minute. This is the theme of my new album — really giving it up and showing you what a person really goes through to get to that point. I was starving to get here. Now that I'm here, it's like, man, it's not what I thought it would be. It's not really that good. It's great, but personally, you go through things regular people go through.

"That's just how life is," he added. "Especially when God blesses us and puts us in a position where we have to deal with adversity. It's crazy that my best friend, my childhood friend, my business partner [80] was paralyzed. He's still in prison. I speak to him every day. Right after that, my other homie was paralyzed. Homie is in and out of prison. It's still real for me. That's why when they see me in the streets, they understand the pain that I'm in is the same as there's. 'Maino, what up? You reppin' for us.' I still try to fight that fight and keep it as thorough as possible."

The Brooklyn, New York, native said he does struggle as his fame and fortune grows and he sees those close to him suffer.

"Sometimes I ask God, 'Why was I chosen to be in this position?' Me having lived the life I lived, why did he bless me one day and lead me on this path?" Maino asked. "I lived a crazy life, and I've done so much and I've lost so much. Why was I able to turn my life around? At the same time I was able to turn my life around, why wasn't I able to save my people? 'Man, I can't save my people.' I can't save them as fast and as quick as I want to. That's what I go through every day. I'm like, 'I can't save my people, though. I can't save them as quick and fast as I want to. They still suffering.' "

While Main might not have been able to save the few close to him, his messages of hope and overcoming the obstacles have reached the masses. His inspirational "All of the Above" was a platinum single last year. Undoubtedly, somebody who has heard the record was touched by his message.

"I had a conversation with a dude that told me I stopped him from committing suicide," he said. "I said, 'Wow.' I'm glad I was able to help him. This was just through music. That's what music is for. It's the soundtrack to your life."