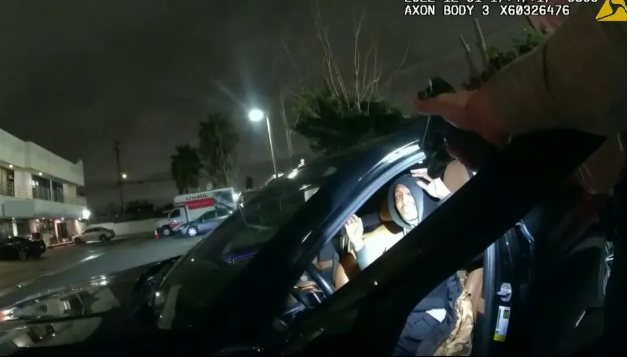 A Los Angeles rapper has filed a $10 million claim, alleging L.A. County deputies unjustifiably threatened to shoot him while he was sitting inside his car on New Year’s Eve.

Bodycam footage shows a deputy pointing a gun at Feezy Lebron (née Darral Scott),  as he was sitting inside his car at a Gardena parking lot.

Lebron said he was sitting in his car listening to music while awaiting a friend when LASD deputies pulled up & “began to harass” him.

Lebron’s attorney says the deputies opened Lebron’s door without warning, grabbed his arm & attempted to pull him out of the car without any explanation.

“If you take off in this car, I’m going to shoot you,” says the deputy in the video. “I’m going to make it super easy on you. You put this car in drive, you’re getting one right to the chest.”

“Without any justification, the deputy drew his firearm & pointed it directly at Claimant at point blank range, who had his hands up & was not moving,” the statement read. “Claimant was then forced out of his car, searched & tightly handcuffed, causing him physical injuries…He was detained in the back of a patrol vehicle for approximately 20-40 minutes while deputies searched his car without consent or lawful justification.”

Ultimately, Lebron was not arrested & was instead given a ticket for a missing license plate.

Lebron thought he would be “killed & would never see his children again,” said the statement. “[He] has been completely traumatized by the incident & sought emergency care several days later. He continues to suffer panic attacks, is unable to sleep & is afraid to drive.”

The L.A. Sheriff’s Department said the incident is under investigation.