In Kabul Children As Young As 4 Forced To Work Backbreaking Jobs In Brick Factories So Their Families Can Survive: "How Can We Think Of School When There's No Bread To Eat?" 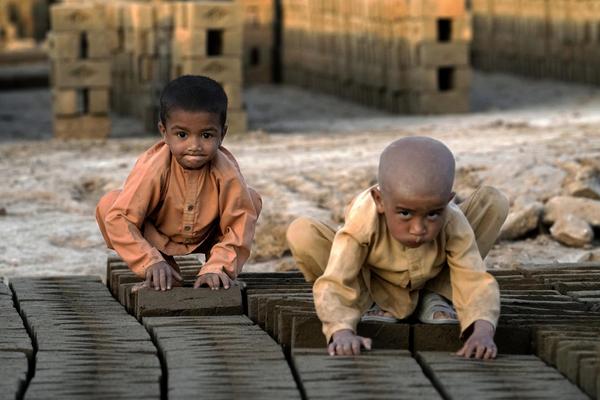 KABUL, Afghanistan (AP) — Nabila works 10 hours or more a day, doing the heavy, dirty labor of packing mud into molds & hauling wheelbarrows full of bricks. At 12 years old, she’s been working in brick factories half her life now & she’s probably the oldest of all her co-workers.

“We can’t think about anything else but work,” she said.

Nowhere is it clearer than in the many brick factories on the highway north out of the capital, Kabul. Conditions in the furnaces are tough even for adults. But in almost all of them, children as young as 4 are found laboring alongside their families from early in the morning until dark in the heat of summer.

Children are doing every step of the brickmaking process. They haul cannisters of water, carry the wooden brick molds full of mud to set them out in the sun to dry. They load & push wheelbarrows full of dried bricks to the kiln for firing, then push back wheelbarrows full of fired bricks. They pick through the smoldering charcoal that’s been burned in the kiln for pieces that can still be used, inhaling the soot & singeing their fingers.

Mohabbat, a 9-year-old boy, stopped for a moment with a pained expression as he carried a load of charcoal. “My back hurts,” he said.

Asked what he wished for, he first asked, “What is a wish?” Then once it was explained, he was quiet a moment, thinking. “I wish to go to school & eat good food,” he said. “I wish to work well so that we can have a house.”

“There’s no other way,” he said. “How can we study when we don’t have bread to eat? Survival is more important.” We’re used to it,” he said. Then he told another boy, “Hurry up, let’s finish it.”

Workers get the equivalent of $4 for every 1,000 bricks they make. One adult working alone can’t do that amount in a day, but if the children help, they can make 1,500 bricks a day.