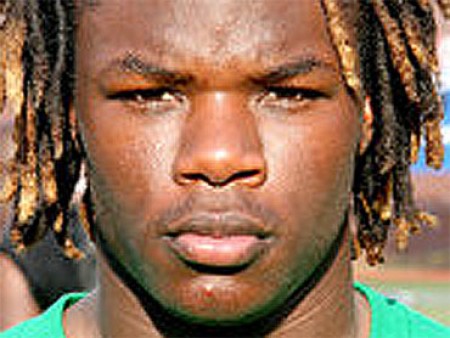 A high school football star who had signed to play at Vanderbilt University was shot to death early Thursday by his mother's ex-boyfriend shortly after police arrived to investigate a report of a person with a weapon, authorities said.

Officers heard four or five gunshots around 2:30 a.m. as they arrived at the home where Rajaan Bennett, 18, lived with his mother, said Powder Springs Maj. Charles Spann. Inside they found Bennett, a running back at McEachern High School who was rated among Georgia's top college football prospects, dead of a gunshot wound.

Boyd said Clifton Steger, 39, of Milledgeville shot Bennett and then killed himself. Bennett's uncle, Taiwan Hunter, 32, was wounded and underwent surgery. He was in critical condition Thursday afternoon. His mother, Narjaketha Bennett, and two other children were unharmed.

It was not clear what prompted the shooting, but Spann said there was no sign of a struggle. He also said there had been no previous reports of domestic violence at the west Georgia home.

"We are still investigating," he said. "We won't make any assumptions until we finish our investigation."

McEachern football coach Kyle Hockman said while Bennett excelled on the football field - he rushed for more than 1,800 yards and 28 touchdowns last season - he also led an exemplary life outside of sports.

"He was an All-State football player, but he was a better person," he said. "He touched the lives of thousands."

Bennett picked Vanderbilt over other schools because he felt it would help better prepare him for life after football, Hockman said. Vanderbilt coach Bobby Johnson said in a statement that Bennett "was an extraordinary young man and an ideal fit" for his program.

"Our thoughts and prayers are with his mother Narjaketha and family members," he said. "I know he meant so much to them."

Bennett, a native of Fort Lauderdale, Fla., had an outsized reputation at McEachern, a sprawling school on the outskirts of west Atlanta that sports a football field in the middle of campus.

"We have a population of 2,200 kids, and when you're Rajaan Bennett, you touch the lives of all 2,200," said principal Regina Montgomery, who added that counselors will be on hand to help students.

More than 100 hundred students gathered at a somber candelight vigil in the pavement surrounding a park near the school, singing songs and sharing stories about Bennett. A poster sat near the middle of the vigil that read: "God only takes the best."

"He always had a smile on his face. He was definitely a leader. He was no follower," said Keyon McGhee, a 17-year-old senior. "It will be hard to get over this. Everybody knew him, even the freshmen."