A Georgia cop has been placed on administrative duties, pending an internal investigation after video surfaced of a July of 2016 DUI traffic stop, where he tries to calm a nervous white driver be telling her she didn't need to worry because police only kill African Americans.

The woman told Lt. Greg Abbott that she was afraid to reach for the mobile phone in her lap because she had seen too many videos of motorists being shot by cops. 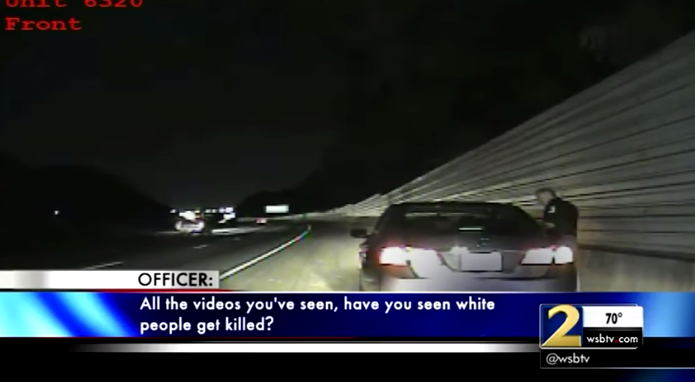 The video was obtained by WSB-TV through an open records request.

"We saw the video and we're going to deal with it," Cobb County Chief Mike Register told WSB. "No matter what context it was said in, it should not have been said."

Abbott's attorney responded to the video via a statement to TMZ: "He was attempting to de-escalate a situation involving an uncooperative passenger. In context, his comments were clearly aimed at attempting to gain compliance by using the passenger's own statements and reasoning to avoid making an arrest.”

Abbott has been canned from his job with the Cobb County Police Department.

“There’s really no place for these types of comments in law enforcement," Cobb County Chief Mike Register said during a news conference Thursday. "I don't know what was in his heart, but I know what came out of his mouth. In no context can I tolerate this type of language."