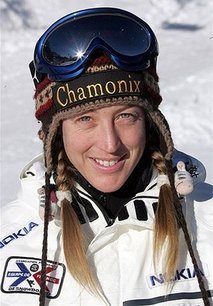 CHAMONIX, France – Karine Ruby, a former Olympic snowboarding champion who had been training to become a mountain guide, died Friday in a climbing accident on Mont Blanc. She was 31.

Ruby was roped to other climbers when she and some members of the group fell into a deep crack in the glacier on the way down the mountain, Chamonix police official Laurent Sayssac said.

A 38-year-old man from the Paris region died in the fall, and a 27-year-old man was evacuated by helicopter with serious injuries and hospitalized, Sayssac added.

"Karine incarnated the emergence of snowboarding in France," Fillon said in a statement. "The people of France will hold on to the memory of her talent and her joie de vivre."

She retired after the 2006 Turin Olympics, where she was eliminated in the quarterfinals of the snowboardcross event. Ruby had since been working toward becoming a mountain guide and was expected to finish her training in the coming weeks.