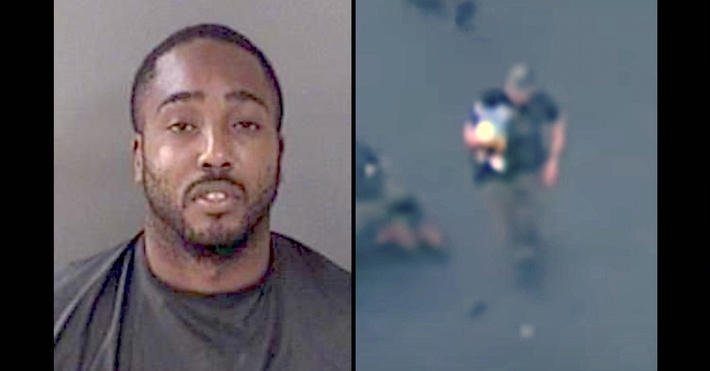 GIFFORD, Fla. (WFLA) — New video shows a deputy holding a baby that had been tossed at him by a father who led deputies on a high-speed chase in Indian River County.

The incident started on State Road 60 in Vero Beach when deputies attempted a traffic stop for failure to maintain the lane. Instead of stopping, 32-year-old John Henry James III drove off.

The sheriff’s office said units tried to pull James over, but he ignored the sirens & kept driving towards Gifford.

During the course of the pursuit, James struck the front end of a detective’s vehicle. He also dodged roadblocks & at least one attempted stop-stick deployment. James’ car then crashed into an unmarked patrol car and deputies attempted to use stop sticks to disable the car as James led deputies into an apartment complex.

As he bailed out of his car, James grabbed a 2-month-old boy who had been in the car with him & threw the child in the direction of a deputy who thankfully caught the boy.

Following the throw, the sheriff’s office said James fled on foot through trees & between buildings.

Deputies eventually captured James in a parking lot & took him to a local hospital due to cuts to his face & James’ claims that he couldn’t breathe due to his asthma.

Deputies say James continued resisting, even while being placed on the stretcher to be loaded into an ambulance.

“You can’t throw a baby at us & expect us to treat you with kid gloves,” Sheriff Eric Flowers said.

James was medically cleared from the hospital on June 1 & faces multiple counts of aggravated child abuse, reckless driving, resisting arrest with violence, aggravated battery on an officer & fleeing & eluding. He is currently being held without bond.