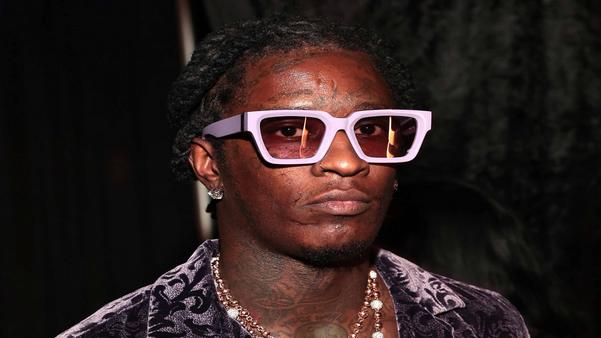 Federal prosecutors appear ready to paint Young Thug as a key figure in a sprawling criminal operation & they’re relying heavily on his music to do so.

The rapper, real name Jeffrey Williams, was one of 28 members or associates of the alleged Young Slime Life “criminal street gang” arrested Monday, May 9, following a 56-count grand jury indictment (fellow rapper Gunna, real name Sergio Giovanni Kitchens, was among the others arrested and charged). Williams, whom prosecutors identified as a founder of YSL, was hit with two charges — violating the RICO Act & participation in criminal street gang activity & beneath those umbrellas are a handful of serious accusations.

The indictment contains allegations that Williams was in possession of stolen weapons & that he possessed with intent to distribute methamphetamine, hydrocodone, and marijuana. Insofar as Williams was allegedly a key figure within YSL, prosecutors accused 2 associates (Christian Eppinger and Antonio Sumlin) with conspiracy to commit murder “by discussing how to obtain the permission of ’Slime,’ AKA Jeffrey Williams, to make a second attempt to murder” Atlanta rapper YFN Lucci while he was incarcerated. The indictment’s heaviest accusation against Williams dates back to 2015, when he is accused of renting a car that was “used in the commission of the murder of Donovan Thomas, Jr., a rival gang member.”

The exact nature of the evidence the government has in relation to these charges isn’t laid out in the indictment. But in scanning the document, prosecutors appeared to rely heavily on social media posts & song lyrics to paint Williams as a violent gang figure. (Williams wasn’t the only person prosecutors used this tactic on; social media photos of other alleged YSL associates holding up gang signs and/or wearing red clothing — as YSL is allegedly associated with the Bloods — were peppered throughout.)