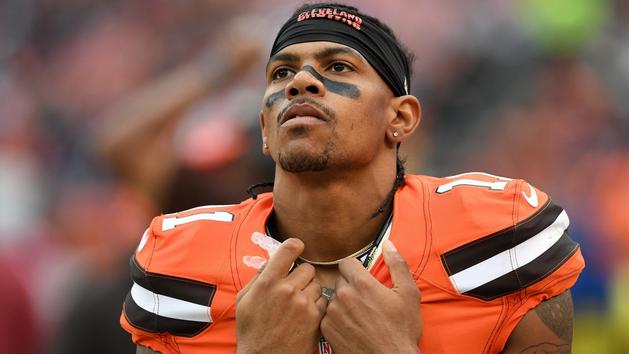 Former NFL wide receiver Terrelle Pryor is in stable condition after being stabbed overnight at the Heinz Lofts apartment complex in Pittsburgh, according to NFL Media. Police were on the scene Saturday morning, according to a report from WTAE, and Pryor was initially in critical condition when the attack was first reported.

An unidentified woman is in custody at Pittsburgh Police Headquarters for allegedly being connected, according to the report. ESPN's Adam Schefter reports that Pryor was stabbed in the shoulder and chest.

The Jeannette, Pennsylvania native has not played in a regular season game since Nov. 11, 2018. Pryor was drafted as a quarterback by Oakland in the third round of the 2011 NFL Supplemental Draft. After five seasons with the Raiders, Seahawks, Chiefs and Bengals, he began transitioning to the wide receiver position. In 2016, the Ohio State product recorded 77 receptions for 1,007 yards and four touchdowns with the Browns. Since then, he has recorded just 36 receptions with the Redskins, Bills and Jets. He joined the Jaguars this offseason but was consequently released in September.

Pryor, now 30 years old, was named Big Ten Freshman of the Year in 2008 with the Buckeyes. He also won the Big Ten championship twice and currently holds the NFL record for the longest touchdown run by a quarterback (93 yards).