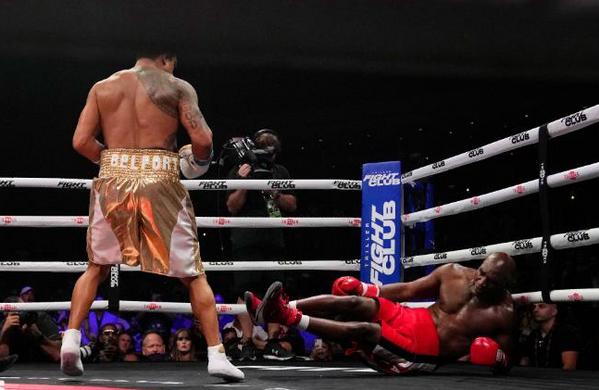 (CNN) Former world champion boxer Evander Holyfield stepped back in the ring for the first time in over a decade, but it didn't go quite to plan for the 58-year-old.

Holyfield, who is best known for his two victories over Mike Tyson -- including the infamous fight in which Tyson bit his ear -- suffered a first-round technical knockout to former UFC fighter Vitor Belfort on Saturday at the Seminole Hard Rock Hotel and Casino in Florida.

Belfort, 44, who was a UFC light heavyweight champion, attacked Holyfield with a succession of quick punches early on, pinning him against the ropes.

And, having not landed a punch of his own, Holyfield was knocked to the canvas twice before the referee called an end to the fight in the first round.

He returned to boxing with just over a week's notice to replace Oscar De La Hoya, who contracted Covid-19.

Belfort called it a "legendary" moment given the tough season everyone is going through.
"I remember I was fighting two guys on the same night and Holyfield was fighting Mike Tyson for $30 million," he told the media after. "It's been a privilege."

While the two former combat sports competitors did battle in the ring, former US President Donald Trump and his son, Don Jr., provided their input from the commentary booth.

The Trumps were part of the commentary team for the event, alongside rapper 50 Cent.

Trump has long been a fan of boxing and mixed martial arts.

He hosted several of Tyson's early fights at his Atlantic City property. Trump was a sponsor of one of Tyson's most famous knockouts -- his destruction of Michael Spinks in just 91 seconds.