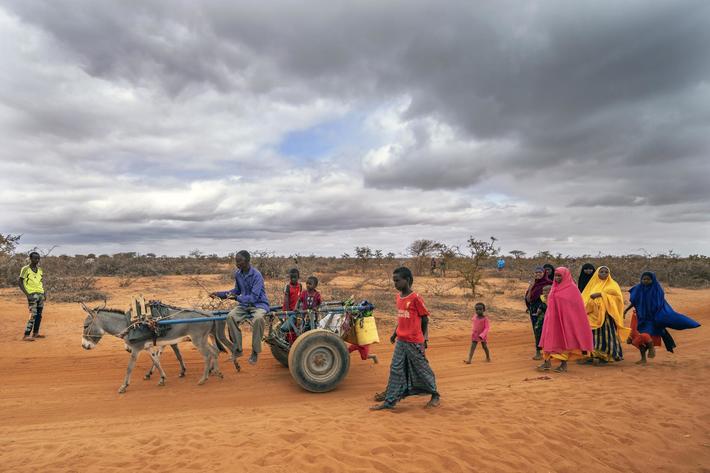 The Associated Press spoke with a dozen people in rapidly growing displacement camps during a visit to southern Somalia in late September. All say they’ve received little aid, or none. A day’s meal might be plain rice or just black tea. Many camp residents, overwhelmingly women & children, beg from neighbors, or go to sleep hungry.

Mothers walk for days or weeks through bare landscapes in search of help, at times finding that the withered, feverish child strapped to them has died along the way.

“We’d grieve, stop for a while, pray,” Adego Abdinur says. “We’d bury them beside the road.”

She holds her naked 1-year-old in front of her new home, a fragile hut of plastic sacks & fabric lashed together with cord & stripped branches. It’s one of hundreds scattered over the dry land.

The home the 28-year-old Abdinur left was far superior — a farm of maize & dozens of livestock in the community where she was born & raised. The family was self-sufficient. Then the water dried up & their 4-legged wealth began to die.

“When we lost the last goat, we realized there was no way to survive,” Abdinur says. She & her 6 children walked 186 miles here, following rumors of assistance along with thousands of other people on the move.

“We have seen so many children dying because of hunger,” she says.

At the heart of this crisis, in areas where famine likely will be declared, is an Islamic extremist group linked to al-Qaida. An estimated 740,000 of the drought’s most desperate people live in areas under the control of the al-Shabab extremists. To survive, they must escape.

Al-Shabab’s grip on large parts of southern & central Somalia was a major contributor to deaths in the 2011 famine. Much aid wasn’t let into its areas & many starving people weren’t let out. Somalia’s president, who has survived 3 al-Shabab attempts on his life, has described the group as “mafia shrouded with Islam.”

Those who escaped al-Shabab now cling to a bare existence. As what should be the rainy season arrives, they wake in camps under a purple sky, or a gray one offering the tiniest specks of moisture.