When Drake sent out a tweet Wednesday talking about his new found wealth he probably never thought in a million years that someone would put him to shame, but that's exactly what happened.

Drizzy told his 7.4 million Twitter followers that "The first million is the hardest."

T. Boone Pickens, the chairman of BP Capital, who has a net worth of $1.4 billion according to Forbes, apparently got wind of the Young Money star's tweet and answered him back by saying “The first billion is a helluva lot harder."

The funny exchange between the two drew a lot of interest on social networking site. A total of 24,000 people retweeted it according to Mashable.com.

Drake knew it was pointless to keep going back and forth with Pickens and bowed out gracefully, acknowledging his defeat. 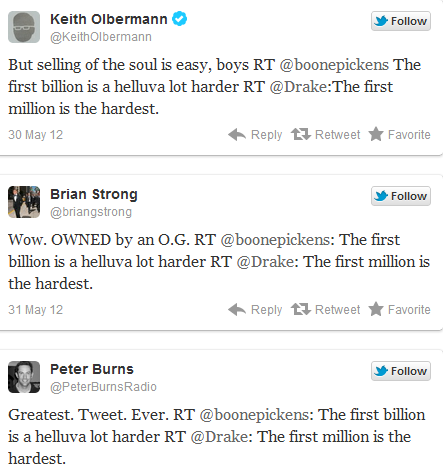