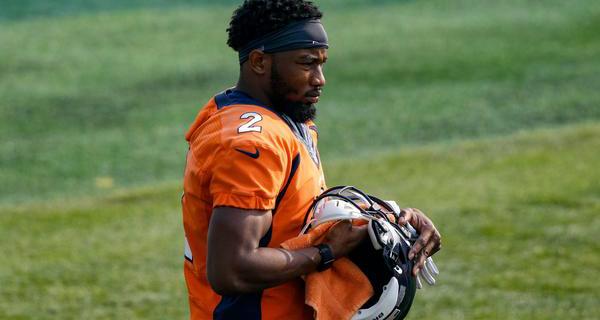 When the Denver Broncos play the New Orleans Saints on Sunday, the player they'll likely have under center is a rookie wide receiver who has never played -- let alone taken a snap at quarterback -- in his NFL career.

A Broncos official told USA TODAY Sports on Saturday night that Kendall Hinton is expected to be elevated from the practice squad and get the start. That's because all quarterbacks on the Broncos roster -- Drew Lock, Brett Rypien, Jeff Driskel and Blake Bortles -- have been placed on the COVID-19/reserve list.

The official added that the Broncos are still sorting through their quarterback options, which include backup running back Royce Freeman. The person requested anonymity because of the sensitivity of the situation.

The Broncos signed Hinton as an undrafted free agent out of Wake Forest, but cut him just before the start of the regular season. Earlier this month, they re-signed him to provide depth at wide receiver, never suspecting he might end up helping them in a completely different way.

Hinton played quarterback for parts of four seasons at Wake before transitioning to a wideout his senior year. Over his college career, he completed 53% of his passes for 1,504 yards with eight touchdowns and seven interceptions. He also ran the ball 188 times for 881 yards (4.7 YPC) and 12 TDs.

After moving to receiver in 2019, he caught 73 passes for 1,001 yards and four touchdowns for the Demon Deacons.