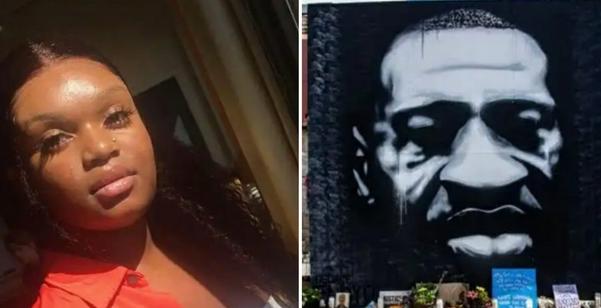 A leading literary and human rights organization said Tuesday that it is bestowing its annual Courage Award to the Minneapolis teenager whose video of George Floyd's killing by Minneapolis police was viewed by millions and inspired global outrage.

Darnella Frazier will receive the Benenson Courage Award from PEN America during a virtual gala celebration on Dec. 8.

"With nothing more than a cellphone and sheer guts, Darnella changed the course of history in this country, sparking a bold movement demanding an end to systemic anti-Black racism and violence at the hands of police," PEN America CEO Suzanne Nossel said in a statement announcing Frazier's selection.

"With remarkable steadiness, Darnella carried out the expressive act of bearing witness, and allowing hundreds of millions around the world to see what she saw," Nossel added. "Without Darnella's presence of mind and readiness to risk her own safety and well-being, we may never have known the truth about George Floyd's murder."

Frazier is "humbled to receive this award and very grateful," said Kelley Bass Jackson, a public relations specialist who is assisting the teen's family in navigating her unintended presence in the public spotlight. "And she's grateful for PEN America for thinking of her."

On May 25, the 17-year-old Frazier documented the arrest of Floyd, who fell into unconsciousness as now-fired police officer Derek Chauvin kept his knee on Floyd's neck for roughly nine minutes. Floyd was later pronounced dead.