Kanye West made a big impression when he opened the BET Awards by performing “Power” atop a volcano. But Kanye’s presence wasn’t the only big thing on stage. The rapper’s enormous jewelry also caught the eye of viewers.

Jacob & Co. created a custom-made link chain and charm depicting Egyptian god Horus, as well as a four-finger pyramid ring, for Mr. West’s comeback performance. Both are made of 24k yellow gold.

According to Kanye’s blog, Horus is one of the oldest and most significant deities in the ancient Egyptian religion. Horus served many functions in the Egyptian pantheon, most notably being god of the sky, god of war, and god of protection.

Kanye’s monstrous chain and ring came with a larger-than-life price tag. Both items retail for a whopping $300,000, a spokesperson for Jacob & Co. tells Rap-Up.com. How’s that for the royal treatment? 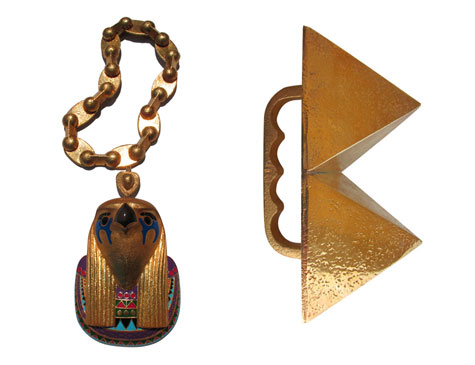