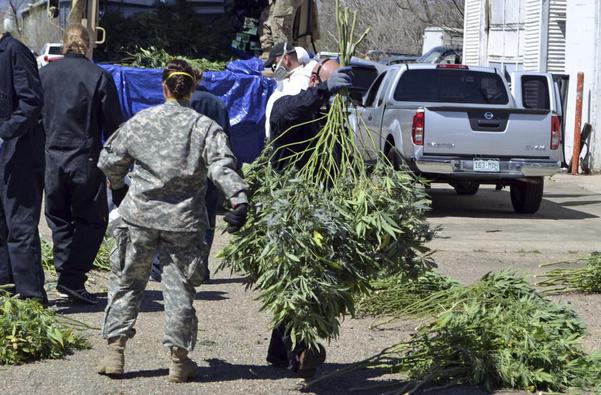 SALEM, Ore. (AP) — A county in southern Oregon says it is so overwhelmed by an increase in the number and size of illegal marijuana farms that it declared a state of emergency Wednesday, appealing to the governor and the Legislature’s leaders for help.

The Jackson County Board of Commissioners said law enforcement officers and county and state regulators and code enforcers are overwhelmed and warned of an “imminent threat to the public health and safety of our citizens from the illegal production of cannabis in our county.”

Illegal marijuana grows have been a persistent problem throughout the West, even in states like California that have legalized pot. A megadrought across the West has created urgency, though, as illegal growers steal water, depriving legal users including farmers and homeowners of the increasingly precious resource.

Only four Oregon Water Resources Department full-time employees handle complaints and perform all of their other duties in Jackson County and neighboring Josephine County, the commissioners said.

Josephine County has also been hurt by illegal grows that have drained creeks and siphoned off groundwater. Josephine County Sheriff Dave Daniel believes there are hundreds of illegal operations in his county alone. One with 72,000 marijuana plants that was drawing water from the Illinois River was raided after a dying person who worked there was dropped off in a nearby village.

Oregon voters made producing, processing, selling and using recreational marijuana legal in a ballot measure in 2014. Pot businesses must be registered by the state, which enforces compliance with rules. But some growers and processers remain outside the law, joined by a recent influx of outsiders in Jackson and Josephine counties who seek large profits by selling on the black market outside of Oregon while avoiding state taxes and regulations.

The illegal marijuana farms are often posing as legal hemp farms, the commissioners noted. The Oregon Health Authority and the Oregon Liquor and Cannabis Commission recently reported that nearly 50% of registered hemp farms inspected in the state are illegally growing marijuana, with a THC content — the compound that gives cannabis its high — greater than legal limits.