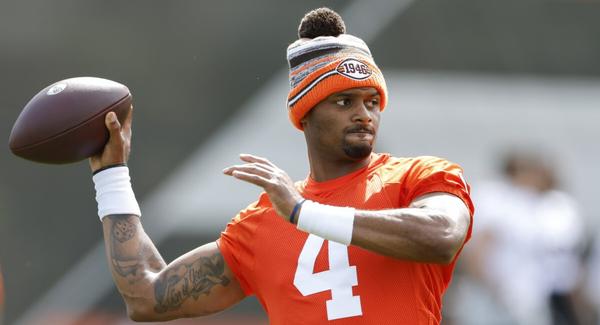 Watson will not be fined.

Watson is eligible to return for the Browns' Oct. 23 game at Baltimore.

The NFL Players Association, in a statement Sunday night, made it clear that it will "stand by" Robinson's ruling & urged the NFL to do the same.

Sources close to Watson believe 6 games is too much, but they respect the decision.

Either side would have 3 days to submit an appeal in writing. In that case, NFL commissioner Roger Goodell or his designee "will issue a written decision that will constitute full, final and complete disposition of the dispute,'' per terms of Article 46 in the league's collective bargaining agreement.

Watson has been accused of sexual assault and inappropriate conduct during massage sessions in civil lawsuits filed by 25 women. The encounters cited in the lawsuits took place between March 2020 & March 2021, while Watson was a member of the Houston Texans. One of the 25 lawsuits was dropped following a judge's ruling in April 2021 that the plaintiffs needed to amend their petitions to disclose their names. In June, Watson settled 20 of the 24 lawsuits he was facing; on Monday, he agreed to settle 3 of the remaining 4.