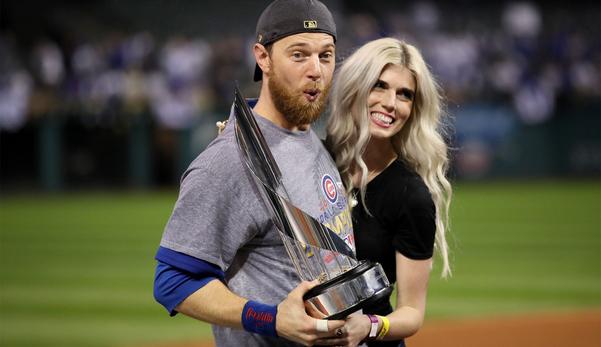 Julianna Zobrist, the wife of former Chicago Cubs star Ben Zobrist, is seeking $4 million as she claimed her husband allegedly failed to “preserve marital assets” when he took a leave of absence from the Major League Baseball team in 2019.

In court documents obtained by the Chicago Tribune on Monday, Julianna Zobrist claimed the 2016 World Series MVP “intentionally and voluntarily stopped working” & went from “the top of his game” to “giving up” which affected the household income.

She is reportedly seeking an even split of marital assets & the large sums claiming the figure is the “amount of money he failed to preserve by abruptly & intentionally failing to satisfy his baseball contract.”

Zobrist is estimated to have made about $78.3 million during his 13-year baseball career.

The former MLB player’s attorney, Helen S. Rogers, called the claim “utterly absurd” in a filing to the judge who is set to handle the divorce proceedings. Rogers said that Julianna Zobrist’s alleged affair with former Tennessee pastor Byron Yawn caused the outfielder “extreme mental distress” & added that the singer “coaxed” her husband into returning to the Cubs.

“Rather than accepting blame for having torn her husband’s heart out by having an affair with their pastor, she expected him to be able to totally focus in an elite athletic job that required (100%) of his physical & mental energy,” Rogers wrote in the filing. “It is Mrs. Zobrist, by having the extramarital affair & confessing same to her husband & not disclosing the true extent of her affair, that caused him such extreme mental distress & difficulty that resulted in an inability to finish his long & very successful career in the way that he had hoped for & planned for.”

Divorce proceedings are set to take place on Aug. 9.