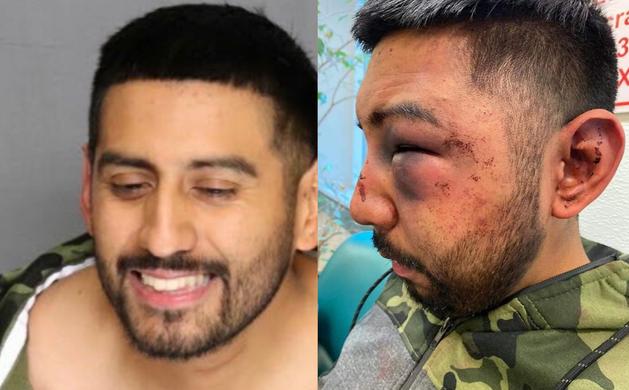 SAN JOAQUIN COUNTY (CBS13) — The man who claims he was beaten in a racist attack by San Joaquin County Jail guards was charged with five counts of battery on a custodial officer the morning of the incident.

The San Joaquin County Sheriff’s Office released jail surveillance video of the incident Thursday, showing Jacob Servin in processing and being taken to and from a temporary holding cell at the jail. The footage does not show the incident in question because there are no cameras inside the holding cells due to the Prison Rape Elimination Act, which provides privacy areas to inmates.

Servin was arrested late Sunday for suspicion of public intoxication in Stockton. Officials say Servin was taken to the holding cell after being uncooperative and not answering deputies’ questions.

The sheriff said he was combative after his arrest, grabbing a female officer, reaching for an officer’s equipment, kicking an officer in the chest, and trying to bite staff. But Servin denies the claims that he was violent and said, “that did not happen.”

After the reported incident that left Servin bloody and bruised, the sheriff’s office said patrol deputies were dispatched to the jail and charged Servin with five counts of battery on a custodial officer. When he was released around noon Monday, he signed a promise to appear in court, acknowledging these new charges. He is expected in court on Dec. 17.

CBS13 spoke with Servin on Wednesday. He said he didn’t know if he would survive what he calls, a “violent, racist attack,” at the hands of three correctional officers.

Servin says what happened to him goes beyond standard operating procedure and he wants to share his story.

Servin says he is planning on filing a lawsuit against the officers.