Buffalo Mass Shooter ID'd As Payton Gendron. Attack Being Treated As A Hate Crime. Suspect Livestreamed The Murders Of 10. Released A Manifesto Blaming 4Chan For His Radicalization (Video) 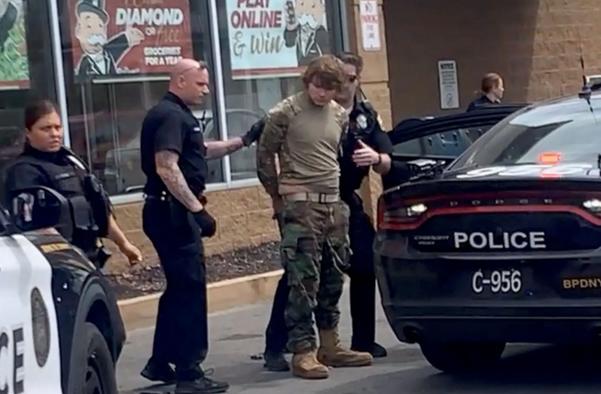 10 people were killed and  others wounded in a “racially motivated” mass shooting Saturday, by a young man in military-style gear who was toting an assault rifle & livestreaming the mayhem at a Buffalo supermarket, authorities said.

The shooter — identified by law enforcement as 18-year-old Payton Gendron — drove from “hours away” in Conklin, New York, to the Tops market, in a predominantly black neighborhood.

“We are investigating this incident as both a hate crime & a case of racially-motivated violent extremism,” said Stephen Belongia, the special agent in charge of the FBI’s Buffalo field office said during a press conference.

“This was pure evil. It was a straight-up racially motivated hate crime,” he said.

The shooter arrived at the market at around 2:30 p.m. He “was very heavily armed. He had tactical gear on. He had a tactical helmet on,” Buffalo Police Commissioner Joseph Gramaglia said.

He also had a camera to livestream the shooting.

The gunman opened fire in the parking lot, killing 3 people & injuring a fourth, he said.

He then went inside the store, where he encountered a longtime “beloved” security guard & former Buffalo cop, who tried to stop him.

The shooter opened fire on the guard, killing him, Gramaglia said, before allegedly working his way through the rest of the store.

Buffalo cops confronted the shooter, who at one point put his gun to his own neck before authorities were able to talk him into surrendering, officials said.